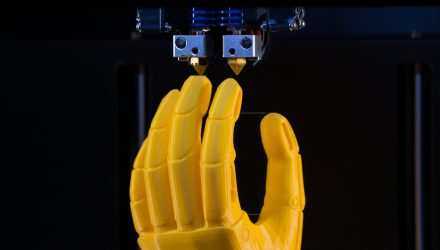 3D printing was one of the original disruptive technologies and while it may be lost in the shuffle these days, a growing number of data points confirm the investment thesis remains solid, indicating the 3D Printing ETF (CBOE: PRNT) is worth a look.

In fact, the 3D printing industry is expected to grow in exponential fashion over the next several years.

“In 2020, the global 3D printing industry is expected to be worth $16bn, revealed Wohlers Associates Annual Report on the State of 3D Printing,” reports LearnBonds. “In the next two years, the market revenue is forecast to touch $25.5bn. Statistics indicate the strong upward trend is set to continue in the following years, with the market revenue growing by a compound annual growth rate of 26.4% between 2020 and 2024.”

Across an array of industries, prototypes serve as the backbone of 3D printing growth.

“The State of 3D Printing Report by Sculpteo also revealed that in 2020, the most popular use case of 3D printing was prototyping among 68% of those asked, a 34% rise compared to 2017 figures.  Another 59% of companies and businesses used the technology for proof of concept purposes, 36% more than three years ago,” notes LearnBonds. “Statistics show that 49% of companies used 3D printing in production, a 27% rise in 2017. Research & education and creation of mechanical & spare parts follow with 42% and 40% of respondents, respectively.”

ARK believes 3D printing will revolutionize manufacturing by collapsing the time between design and production, reducing costs, and enabling greater design complexity, accuracy, and customization than traditional manufacturing. Patents are another integral component in the 3D printing investment thesis.

“Looking at the number of 3D printing patents over the last decade, HP is the global leader in this field.  The US multinational information technology company publicly traded on the New York Stock Exchange (NYSE: HPQ) set up its 3D printing unit in 2014. Today, it has a total of 454 published patents for 3D printing,” according to LearnBonds. “US conglomerate General Electric (NYSE: GE) ranks second, with a total of 408 3D printing patents in the last decade.  In 2018, the US multinational filed a patent to use Blockchain technology to validate and verify 3D printed parts in its supply chain. This technology makes it possible to store and transmit information in a transparent, secure, and functional way without a central control body.”