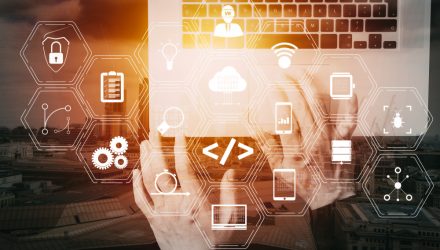 The ARK Web x.0 ETF (NYSEArca: ARKW) is up nearly 80% this year and more than doubled over the past 12 months. Figures like that could imply near-term upside is limited from here. In reality, ARKW may just be getting started and a new age of software could be an epic long-term driver for this actively managed fund.

Although it’s positioned to capitalize on multiple growth themes, ARKW offers compelling exposure to the megatrend of software as a service (SaaS).

“In the past few years, the number of enterprise Software-as-a-Service (SaaS) companies going public has increased significantly,” writes ARK analyst James Wang in a recent white paper. “Once a nascent and unproven way of serving and selling software, we believe SaaS has become the de-facto business model for both startups and incumbents. While not new, its addressable market and growth seems to have caught many investors by surprise.”

Bolstering the long-term case for ARKW are some alluring data points, including the forecast of the enterprise software space growing at a compound annual growth rate of 21% per year through 2030.

“Cloud computing is perhaps the most important enabling technology behind SaaS companies,” notes ARK’s Wang. “Before cloud computing became widely available, internet software companies had to be experts in building and running data centers, increasing the cost, complexity, and difficulty of scaling an internet software company significantly. Introduced in the mid-2000s,7 cloud computing—specifically infrastructure-as-a-service—made it possible to rent compute resources instead of buying them.”

“The Software-as-a-Service model is a win for all stakeholders—developers, customers, and investors,” according to Wang. “As such, we believe that over time, the vast majority of software revenue will be recurring. Two forces are driving increased SaaS adoption: first, traditional software companies are transitioning their businesses from perpetual license terms to recurring or SaaS terms, as shown below. Second, most of the new software IPOs operate on a SaaS or marketplace-based model.”