You are at:Home»Disruptive Technology Channel»Gene Editing Stocks Might Be Building Some Momentum 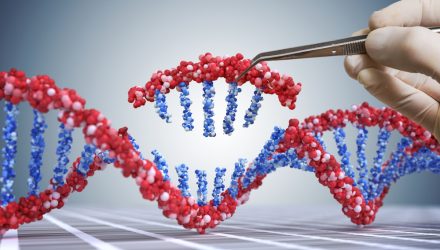 This year, it’s taking place in virtual fashion, but that’s not preventing the event from stoking the usual chatter and optimism directed at specific corners of the biotechnology space. Among the companies generating buzz at this year’s conference are those in the gene editing arena, and that could have implications for exchange traded funds such as the ARK Genomic Revolution Multi-Sector Fund (CBOE: ARKG).

As a genomics ETF, it stands to reason that ARKG is levered to the gene editing trade, and it’s one that could use some positive momentum following a rough 2021. Albeit in incremental fashion, signs are emerging that gene editing stocks might be in for better things this year.

Intellia Therapeutics is ARKG’s sixth-largest component at a weight of about 4%, while Editas Medicine is a smaller member of the ETF’s portfolio at a weight of 0.58%, as of January 11.

Intellia has $1 billion in cash and is making moves, including partnering with larger biotechnology companies, to expand its gene editing capabilities.

“Using the homing ability of a Crispr molecule, Intellia and its partner Regeneron Pharmaceuticals (REGN) knocked out the defective gene responsible for a poisonous protein that damages nerve and heart tissue,” according to Barron’s.

With large-cap biotechnology and pharmaceuticals companies looking to replenish pipelines and get access to next-generation technological advancements and products, partnering with companies like Intellia and other ARKG components is a sensible move.

Another such accord emerged on Monday when Pfizer (NYSE:PFE) announced an in vivo gene editing agreement with Beam Therapeutics (NASDAQ:BEAM), which is another ARKG component. The aforementioned Editas has its own partnership with a blue-chip pharmaceuticals company.

“In partnership with Bristol Myers Squibb (BMS), Editas is developing therapies that modify immune cells to fight tumors. The gene-editing company had nearly $660 million in cash at September’s end, but in its Monday release it said that it is hunting for partners to help advance applications of its editing technologies in the treatment of cancer and regenerating damaged tissue,” reports Barron’s.

It remains to be seen if ARKG will rebound this year, but the early 2022 news flow suggests that the fund’s holdings are, at the very least, attempting to generate positive catalysts.