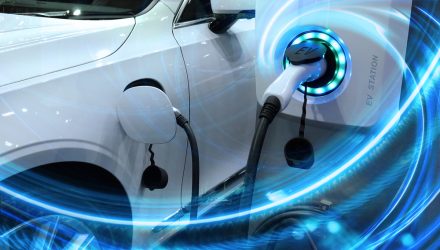 With an 11.18% weight to Tesla (NASDAQ:TSLA) as of Nov. 3, it’s not a stretch to say that the ARK Innovation ETF (NYSEArca: ARKK) is a prime example of an exchange traded fund that’s sensitive to electric vehicle (EV) adoption trends.

Further cementing that notion is the actively managed ARKK’s status as one of the largest ETF owners of Tesla stock. So while ARKK isn’t a dedicated EV fund — far from it, in fact — more EVs on the road, particularly Teslas, are an assist for the ETF. Good news: S-Curve dynamics confirm that car buyers like EVs.

The S-Curve examines adoption of new technologies at various stages, including early adopters, the early majority, late majority, and those late to the party, also known as laggards.

“Contrary to a typical s-curve, since 2013 the growth in global EV unit sales has accelerated from 60% to an estimated 90%+,” according to ARK Investment Management research.

Electric vehicles are in the early innings of development, and there are signs that there is a lot of pent-up demand among consumers who want to embrace the technology. Whether it’s viewing EVs as an avenue for being environmentally friendly or simply eliminating gas expenditures, consumers are displaying some affinity for EVs.

However, there are still hurdles to be conquered. Manufacturers, including Tesla, need to make price parity with internal combustion engine vehicles a reality. While that’s expected to happen soon, the issue of distances between charges also needs to be addressed, particularly among smaller, up-and-coming EV producers. Additionally, some market observers believe that battery production needs to be enhanced to drive further EV adoption.

One way of thinking about those scenarios is remembering that although they’re far from refined, EVs’ S-Curve to this point is undoubtedly impressive, and there’s more room to the upside.

“ARK’s research suggests that the acceleration in EV growth could be a function of several adoption s-curves occurring simultaneously. As battery costs continue to fall, pushing EVs across critical price points that attract new groups of buyers, new adoption cycles begin. According to our research, another major adoption cycle should kick in when EVs hit the ~$25,000 price point during the next few years,” adds ARKK’s issuer.