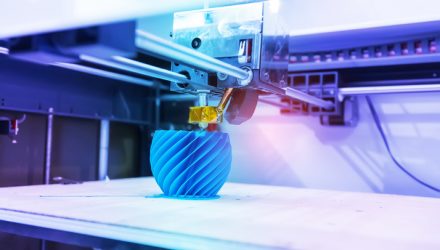 In a market awash in disruptive technology and thematic investment strategies, it can be easy for investors to overlook some ideas, including some that kicked off of the revolution, such as 3D printing.

However, market participants would do well to not count out 3D or underestimate the potential potency of the 3D Printing ETF (CBOE: PRNT).

PRNT debuted nearly three years ago as the first US-listed ETF dedicated to the 3D printing theme. The fund is one of two passively managed products from New York-based Ark Investment Management. ARK believes 3D printing will revolutionize manufacturing by collapsing the time between design and production, reducing costs, and enabling greater design complexity, accuracy and customization than traditional manufacturing.

Data suggest patient investors may want to embrace PRNT now while many market participants are glossing over the still rapid growth offered by 3D printing.

“ARK believes 3D printing will revolutionize manufacturing, growing from $10 billion in 2018 to $97 billion in 2024 at an average annual rate of 65%,” according to the investment manager.

As regulatory guidelines become clearer, healthcare is expected to be a major market for 3D printing products and services in the years ahead.

“Although 3-D printing is touted as the game-changer in healthcare services, the industry has witnessed low adoption owing to the lack of technical understanding as well as lack of clear regulatory guidance,” according to Research and Markets. “The first-ever FDA guideline for 3-D printed healthcare products was published only in December 2017. As the regulations become clearer, the adoption of 3-D printing for body-touching devices is likely to increase.”

Healthcare, including dental, is one of many markets that could prove to be a potent catalyst for PRNT in the year ahead. Retail is another arena ripe for 3D printing disruption.

Moreover, the pseudo collapse of 3D printing investing several years, led mainly by retail investors, has been put to bed, a point the market may not be adequately accounting for.

“3D printing companies have not recovered from the consumer-3D printing hype of 2013-2014. As they have entered the so-called ‘valley of despair,’ 3D printing stocks have suffered from a lack of interest, creating a mismatch between the valuation of public and private companies in the space,” according to ARK.