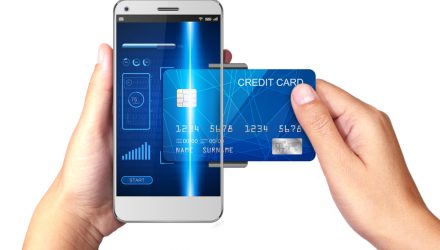 Fintech has long been one of the premier frontiers for disruptive growth investing because traditional banks and financial services firms are among the territories most ripe for disruption.

The ARK Fintech Innovation ETF (NYSEARCA: ARKF) is one of the exchange traded funds that capitalizes on that theme, and it’s arguably one of the best positioned to do just that owing to its exposure to digital wallet providers.

More Americans and people around the world are turning to digital wallets as supplements or outright alternatives to standard bank accounts. That trend is still in its nascent stages, and as it continues expanding, it could generate meaningful implications for companies like Block (NYSE:SQ) — the fintech giant behind Cash App. Block is ARKF’s largest component at a weight of 11.21%.

While the convenience and efficiency offered by digital wallets such as Cash App is undoubtedly compelling to customers, those who are new to this form of banking need to realize that there are some important differences between a digital wallet and a traditional bank account.

“Venmo and PayPal are both part of the PayPal parent company, while Block, formerly Square, owns the Cash App, and these are now major companies, so the protection of FDIC insurance is not necessarily so critical to the average person who isn’t holding large amounts of cash in the first place,” reports Ellen Sheng for CNBC.

PayPal (NASDAQ:PYPL) isn’t a current ARKF component, but it’s been on the ETF’s roster in the past. The good news for customers considering making Cash App or Venmo their primary bank accounts is that the deposit protection offered by the FDIC is likely to only be needed in extremely rare, once-in-a-lifetime scenarios of economic duress. Additionally, some fintech companies are pursuing traditional bank charters, which could enable them to become part of the FDIC system.

“With 5% of Americans unbanked, and three times as many as that underbanked, there are still reasons to consider joining the banking system rather than totally avoiding it,” according to CNBC.

However, statistics like that often speak to why a growing number of folks in those categories are turning to Cash App and the like. While Cash App isn’t backed by the FDIC, it offers all of the same amenities of a brick-and-mortar bank account.