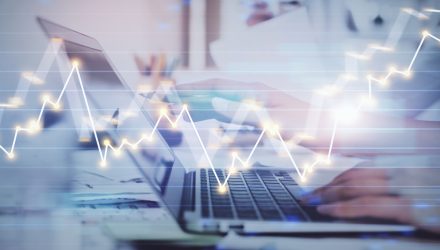 On Wednesday, ETF Trends’ CIO and Director of Research, Dave Nadig, had a few things to say regarding a couple of tech-based ETF picks on the TD Ameritrade Network.

Given the craziness of the last few days, it’s rational to start looking at what rallies out of the recovery for the sake of positioning exposure for the net three to six months. Tech is interesting, as while many investors may just look at some of the larger, more popular options, a lot of the major companies within those funds may have a tough time recovering.

Speaking with host Shawn Cruz, Nadig had a chance to go over what is currently worthwhile about some different options, such as the Global X Cloud Computing ETF (CLOU), and the Proshares Long Online/Short Stores ETF (CLIX).

With CLOU, the first point Nadig was able to get across was how it gives investors just a touch of international exposure, with holdings like Alibaba (BABA). This is good, as China is recovering already, while the U.S. is behind. With that in mind, BABA is up 0.68% in the past month, which is a whole lot better than the market.

CLOU also includes names investors both know and don’t know but will still do well, relative to the market, in this time period. Some companies, like Dropbox or Netflix, may seem like obvious short term winners. However, there are also firms such as 2U (TWOU), which handles online education services, and 12 Vianet (VNET), which is a Chinese company in the data center business.

Additionally, CLOU skips a lot of traditional, hardware-centric tech names like Xerox (down 38% for a trailing month), Western Digital (same story there), and HP (down 34%). It’s not clear to Nadig that anything chip/hardware-related gets much of anything aside from a short term sell, through laptops, and that’s still not enough to keep that part of the sector alive.

Tangentially, another play here is CLIX, strictly a consumer discretionary play that goes long for names including Amazon (making up 25% of the fund) BABA, ETSY, EBAY, GrubHub, and so on — all clear winners here. CLIX shorts out the usual brick and mortar retailers like Walmart and Costco. It also features a very short term that might balance out, but for a longer-term, it seems like an obvious play.

“Both the short and long term trend is going to be on the retailer side,” Nadig states. “I know around the country we’re seeing more and more severe lockdowns, which is going to be a rolling story for the next four to eight weeks. That’s going to mean some of these big retailers are going to have to shut down or dramatically curtail their timeframes in which they are open.”

That’s going to make things different for the brick and mortar stores, and the Amazon employees are going to be working overtime. This is the sort of uncharted territory that’s out there currently, and while it’s not a bottom in the market, it’s notable that a lot of the selling is just going to be done.