You are at:Home»Disruptive Technology Channel»Crypto’s Going to Be Huge for Fintech ETFs 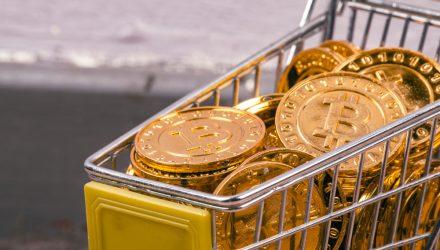 Crypto’s Going to Be Huge for Fintech ETFs

The ARK Fintech Innovation ETF (NYSEARCA: ARKF) is a prime example of an exchange traded fund that’s not short for growth catalysts, but it’s got another one as more companies and investors embrace digital currencies.

With bitcoin in rally mode and other cryptocurrencies following suit, the ability of fintech companies, including ARKF holdings such as Square (NYSE: SQ) and PayPal (NASDAQ: PYPL), to get in on the act is pivotal for fintech investors.

“PayPal Holdings Inc. caused a stir last month when it announced that it will enable users in the U.S. to buy, sell and hold cryptocurrency via their accounts. But it is by no means a first for U.S. cards and payments majors. Square Inc. has allowed users to transfer cryptocurrency since 2018, while Visa Inc. and Mastercard Inc. have both ramped up their cryptocurrency debit card plans in recent years,” according to S&P Global Market Intelligence.

Fintech’s hastening cryptocurrency adoption is meaningful for ARKF investors because the fund has a larger weight to Square than any other ETF.

Bitcoin, the largest digital currency by market value, is on a torrid pace this year, prompting some investors to rue missing out on an incredible run. If a Citi report is even somewhat accurate, there’s still plenty of upside to be had with the cryptocurrency.

In a report calling bitcoin “gold of the 21st century”, CitiBank MD, and former FX technician, Tom Fitzpatrick revealed an uber-bullish target in which the digital asset could vault to $318,000 in just over a year. As more investors sense upside with bitcoin, transaction volumes on platforms such as PayPal and Square are likely to increase.

“The motivations to enter the cryptocurrency space include the potential to boost revenues, as Square has done with its Bitcoin offering, industry observers told S&P Global Market Intelligence. Payments majors are also watching the growing interest that central banks have taken in creating their own digital currencies, or CBDCs,” reports S&P Global.

Up more than 83% year-to-date, ARKF is proving it has positive correlations to rising enthusiasm for digital currencies.