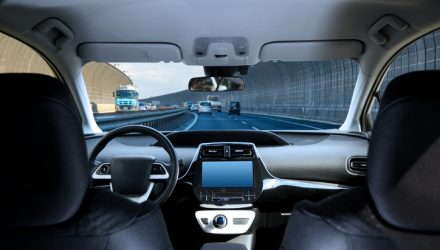 Autonomous Could be Awesome For This ARK ETF

The concept of autonomous vehicles being accessible on an everyday basis is still a few years away, but thanks to companies such as Alphabet (NASDAQ: GOOG), Tesla (NASDAQ: TSLA) and NVIDIA CORP (NVDA), investors can access the theme right here, right now.

“We estimate autonomous ride-hailing will be worth $9T, or more than today’s energy sector, in the next ten years,” said ARK Invest analyst Tasha Keeney in a Tuesday tweet.

“Even though autonomous taxis will come later than originally promised, the market should still be measured in the trillions. After pushing our adoption curve back a year, ARK estimates the NPV of 10 year cashflows could be worth $1-2 trillion today,” notes Keeney.

There are also some speculative, emphasis on that word, forecasts regarding a possible though far from confirmed combination between Google’s Waymo and Tesla.

“The price paid, according to the speculation, would be $1,500 a share, or $270 billion. And the value ultimately realized by Google could be $1.5 trillion,” reports Al Root for Barron’s. “That’s more than 10 times higher than today’s valuation and, in theory, makes Tesla the most valuable publicly traded company in America.”

Related: A Lot of Disruption in One Technology ETF

Investors are always on the lookout for long-term growth opportunities, but now more than ever, it seems prescient to look beyond the immediate noise of the socioeconomic and political headlines and find investment opportunities for the long-haul. Emerging technologies may offer that growth, according to some experts.

“And who captures this value? Autonomous tech owners likely will control the majority of the economics,” notes Keeney. “Today’s ride-hailing platforms don’t seem to have autonomous tech that is market-ready. Best case could be to partner, in which case their 20-30% cuts could shrink to <5%.”