You are at:Home»Disruptive Technology Channel»ARK Buys Bitcoin on the Dip, Adds More GBTC to Internet ETF 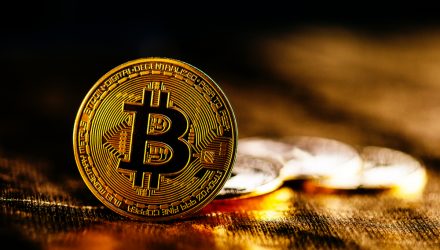 Bitcoin was laboring around $33,300 late Wednesday, a far cry from the all-time highs near $63,000 that were seen in mid-April.

What was once a digital asset with a market value of north of $1 trillion now has a market capitalization of $623.12 billion (as of late June 23). That decline isn’t preventing some well-known investors from buying the dip.

On June 22, ARK Investment Management bought more than one million shares of the Grayscale Bitcoin Trust (GBTC) for the ARK Next Generation ETF (NYSEArca: ARKW). GBTC is the seventh-largest holding in the actively managed ARKW at a weight of 4.09%, as of June 23, according to ARK data.

Obviously, ARKW is about much more than GBTC, and that’s a positive for the fund’s investors because the ETF is proving durable while the largest cryptocurrency falters.

ARKW “has risen 4.6% during the same period, with a gain of 1.7% on Tuesday alone. One positive factor is that the Grayscale fund, which was already trading at a discount to Bitcoin’s price, didn’t fall as much as the cryptocurrency itself,” reports Evie Liu for Barron’s.

ARK, ARKW Not Afraid of Controversy

ARK doesn’t shy away from holdings some may view as controversial and that’s particularly true regarding recent allocations in ARKW. For example, the issuer has been a devoted buyer of DraftKings and Skillz, even as the pair of gaming companies have been assailed by bearish research reports and short sellers.

Those stocks combine for 4.50% of ARKW’s roster. As for Bitcoin, ARK founder Cathie Wood has long been a fan of the cryptocurrency, famously saying it could eventually reach $500,000. That’s not just idle chatter. ARK is backing up that talk in other ways.

For example, the issuer was quick to embrace shares of Coinbase (NASDAQ: COIN) after that company’s recent direct listing. ARK added nearly 215,000 shares of the crypto exchange operator to the ARK Innovation ETF (NYSEArca: ARKK) on Tuesday. That stock also resides on the rosters of ARKW and the ARK Fintech Innovation ETF (NYSEARCA: ARKF).

Critics may be eager to knock ARKW’s exposure to GBTC and some controversial stocks. However, it’s worth noting that at its lowest point this year, ARKW was off 16%. It’s now slightly higher year-to-date thanks to a 10.64% gain over the past month and a 6.61% jump over the past week.