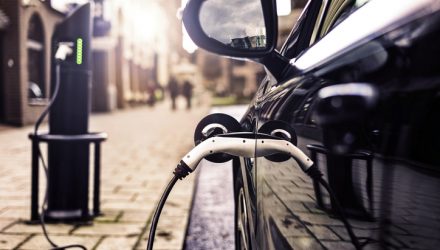 Another Tesla Milestone Lifts This ETF

In late trading Tuesday, shares of Tesla (NASDAQ: TSLA) were higher by more than 4%, elevating the electric vehicle maker’s market value to $83 billion.

On an intraday basis, Tesla became the most valuable U.S. automobile maker on record and should that trend continue, the ARK Innovation ETF (NYSEArca: ARKK) is one ETF that will benefit. As of Jan. 6, the $1.58 billion ARKK allocated almost 11% of its weight to Tesla, giving the fund one of the largest positions in that stock among all ETFs.

New York-based ARK Investment Management, ARKK’s issuer, has long been one of the most overt Tesla supporters, a position that is rewarding investors in ARKK and some of the firm’s other ETFs, including the ARK Web x.0 ETF (NYSEArca: ARKW) and the ARK Autonomous Technology & Robotics ETF (NYSEARCA: ARKQ).

ARKW devotes just over 10% of its weight to Tesla while ARKQ’s allocation to Elon Musk’s company is north of 11%.

On a historical basis, Tesla’s Tuesday ascent is undoubtedly compelling.

All its an adequate proxy on Tesla, ARKK touches many other corners of the emerging technological universe.

Investors are embracing the ARKK as highlighted by 2019 inflows of nearly $358 million. As for Tesla, it looks like the stock, at least over the near-term, is poised to continue driving ARKK higher.

“Regardless of the caveats, Elon Musk’s feat is impressive. He built a car company from scratch this century, and it is now worth more than any of the so-called Detroit-three automakers at any point in history,” according to Barron’s.