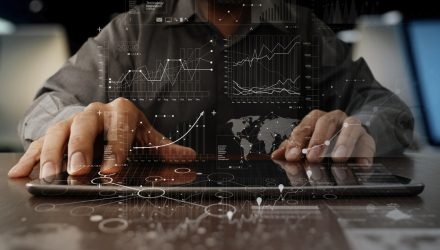 An Ideal ETF for Being Tactical With Disruptive Asset Allocation

As more advisors and investors look to add disruptive technology investments to their asset allocation processes, some are looking to get tactical with sector and industry ideas. A strong avenue for doing just that is the ARK Fintech Innovation ETF (NYSEARCA: ARKF).

Fintech is fertile territory for disruption because many traditional banks were asleep at the wheel when it comes to developing the products and services offered by ARKF holdings and those old school institutions are playing catch-up while ARKF holdings set the pace. Some of these companies are poised to become bigger parts of familiar benchmarks in the coming years, but ARKF is levered to that growth today.

“In the 52 years from 1964 to 2016, the average lifespan of stock in the S&P 500 dropped roughly 25%, from 33 years to 24, according to Innosight,” said ARK Invest in a recent research report. “By 2027, it is likely to drop another 50% to 12 years as transformational technologies disrupt broad-based equity indices, impairing the “old guard”. In other words, we believe in little more than a decade the S&P 500 is unlikely to be even a shadow of itself today.”

ARKF member firms are companies that are powered by innovations and are working to disintermediate or bypass the current financial markets and challenge traditional institutions by offering new solutions that are better, cheaper, faster, and more novel and secure.

In fact, there are plenty of fundamental factors confirming fintech is an epicenter of disruption.

“For example, fintech companies seem to have evolved much faster than expected and already are competing successfully against large financial institutions,” according to ARK. “Relative to bricks and mortar banks saddled with infrastructure, ‘digital wallet’ providers can acquire customers at a fraction of the cost thanks to the convergence between and among three technologies: cloud computing, mobile devices, and artificial intelligence.”

Boding well for the long-term ARKF thesis is that digital wallet users should be valued at the same rate as traditional bank customers, but that’s currently not the case. Plus, it’s cheaper for Venmo and Cash App to acquire new customers.

“As a result, they have more digital users in the US today than the largest banks. Yet rarely, if at all, are digital wallet providers weighted more heavily than banks in value or growth portfolios today,” note ARK.