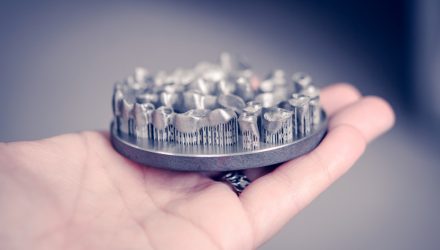 The ARK 3D Printing ETF (CBOE: PRNT) is higher by 24% year-to-date, but there could be more in the store for the ARK fund as 3D printing companies increasingly tap into automation.

PRNT, the original and still only exchange traded fund focusing on 3D printing equities, is positioned to capitalize on growth in the automated 3D printing arena.

Automated 3D printing is another example of two disruptive technologies intersecting. For example, robotics are playing an increasingly prominent role in the 3D printing movement, indicating another ARK Invest ETF – the ARK Autonomous Technology & Robotics ETF (CBOE: ARKQ) – could be another idea to consider on this front.

“Over the years, researchers around the world have been working towards developing solutions and methods that would cater to the demand for automation in 3D printing, one such approach was the combination of robotics technology with 3D printing to automate the tasks although it initially did not gain much momentum owing to its complexity, however, with vendors integrating simulation software with their robotic 3D printing technology is driving the growth of the market,” notes Research and Markets.

The rise of automation in the 3D printing space could bolster the group’s already fast-growing list of industry-level applications. Those include aerospace, automotive, energy, and healthcare, among others. 3D printing can also enhance precision manufacturing while reducing companies’ vulnerabilities to global supply chain disruptions.

Following significant disruptions at the hands of the coronavirus pandemic, the present environment is ripe for automated 3D printing growth. A recent study by the National Conference of State Legislatures indicates the U.S. is importing trillions of dollars worth of goods tied to aerospace, automotive, healthcare, and industrial demand – goods that 3D printing can produce right here in the U.S.

Already the biggest user of 3D printing technologies, the industrial sector is seen as a key driving force in pushing 3D printing to a nearly $63 billion global industry by 2028.

The $557 million PRNT, which is one of two passively managed funds in the ARK stable, turns five years old later this month. The fund tracks the Total 3D-Printing Index.