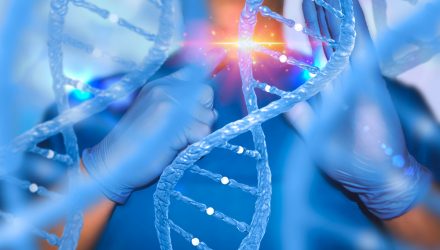 With biotechnology stocks, particularly those in mid- and small-cap territory, heavily out of favor at the moment, it’s not surprising that some investors are ignoring genomics assets.

That sentiment belies what’s still one of the most compelling long-term opportunity sets in the healthcare sector. Gene editing is one of the longer-ranging catalysts for genomics investments, and the ARK Genomic Revolution Multi-Sector Fund (CBOE: ARKG) is one of the exchange traded funds most levered to that theme.

In fact, ARKG is a potentially attractive consideration today for tactical, risk-tolerant investors because with the fund having been beaten down in recent months, it could offering alluring entry points for patient investors, thanks to what could prove to be a stellar long-term growth trajectory.

“The convergence of next generation DNA sequencing, CRISPR gene-editing, and artificial intelligence (AI) has the potential to transform health care. These advances could accelerate the pace of scientific discovery, personalizing medicine to cure disease instead of masking symptoms,” writes ARK analyst Ali Urman. “Based on ARK’s research, the equity market capitalization of gene editing and gene therapy companies could grow 54% at a compound annual rate of return, scaling from roughly $130 billion today to $1.1 trillion by 2026.”

“According to our research, gene editing breakthroughs are creating more effective therapies at a faster rate than historically has been the case,” adds Urman. “Compared to Zinc Finger nucleases (ZFNs), which moved from discovery to the first human dose in roughly eight years, CRISPR took less than half the time, three years, and can address 48% of known diseases, nearly twice ZFNs’ 28%. Prime and Base editing, CRISPR derivatives, address even more diseases, 79% and 59% respectively.”

Compared to ZFNs and TALENs, CRISPR is emerging as the preferred gene editing methodology. It’s also gaining more attention in academic and clinical trials. Those are relevant points to investors considering ARKG because the actively managed ETF features significant exposure to CRISPR equities.

“Given potential cures for diseases, the share of research and development funding for gene therapy innovations should continue to rise,” concludes Urman. “By 2026, the share of total R&D spending devoted to gene editing and therapy companies could grow from 3% to 17%.”