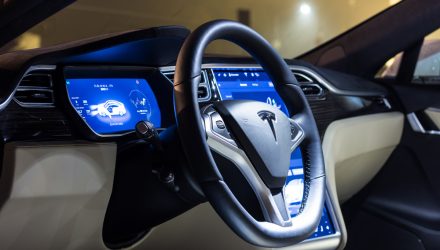 The 10 biggest ETFs with a hefty tilt toward Tesla (NasdaqGS: TSLA) surged on Tuesday as the electric carmaker rallied yet again after experiencing its biggest one-day gain in six years on Monday.

Tesla shares closed 13.73% higher Tuesday after jumping 20% on Monday in response to Argus Research’s upgraded price target to a new Wall Street high of $808 per share, but the price target proved to be too modest for investors. Tesla closed today’s trading at $887 per share.

Among the big benchmark-related ETFs, the Invesco QQQ Trust (NasdaqGM: QQQ), which tracks the Nasdaq-100, was 2.1% higher on Monday as it capitalized off the rally in Tesla shares. QQQ includes a smaller 1.5% tilt toward TSLA, but the fund is the single largest ETF holder of TSLA with 1.76 million shares.

Many attributed the back-to-back gains in TSLA to a combination of market momentum and short sellers covering up bad bets, with heightened interest among large financial institutions.

“I think this is largely the fear of missing out,” Roth Capital analyst Craig Irwin said on CNBC. “The number of large hedge funds calling in, the number of institutional investors calling in, saying ‘Where does it stop? What’s the catalyst?’”

“The momentum is huge,” he added.

“During the past year, traditional automakers have struggled to produce an electric vehicle competitive with Tesla’s as measured by range per dollar spent on batteries,” Wood told ETF Trends. “As a result, even though a number of so-called Tesla-killers launched last year, our research indicates Tesla’s share of the global EV market increased from 17% in 2018 to 18% in 2019. Our previous assumptions incorporated share losses. We also increased our capital efficiency assumptions given Tesla’s swift execution on the Shanghai factory.”

Wood said the main driver of ARK’s bull thesis is what they believe to be Tesla’s future robotaxi business, a recurring revenue model with gross margins closer to the 80% in SaaS models than the 20-30% characteristic of the auto industry.

Meanwhile, short sellers who bet against the stock are down more than $8 billion since the start of the year. Since TSLA traded under $200 last June, short sellers have covered $12.6 billion worth of stock. In other words, short sellers have been a big supporter of the upside momentum in TSLA shares, pushing stock prices higher as they were forced out of shorts and into long positions, a phenomenon known as a short squeeze.

“Everyone is anticipating a dramatic (Tesla) short squeeze, but it is more likely to be a continuous slow decline in shares shorted rather than a sudden abrupt plunge,” according to S3, a financial technology and analytics firm, MarketWatch reports.

“While we are seeing some momentum short sellers increasing their positions in anticipation of a short-term pullback, we should see an increase of short-covering due to this $700/share level squeeze,” S3 added.

Here are 10 ETFs that have Tesla Inc within its Top 15 holdings as displayed below. Data via ETFdb.com.

For more Tesla and other disruptive investing news, visit our Disruptive Technology Channel.