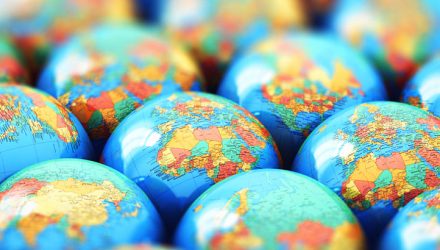 Global economic growth data has continued to strengthen this summer, while inflation in almost every developed economy remains under the generally accepted target of 2% – a curious phenomenon. We believe that the current period may resemble a milder version of the mid-1980s-to-late 1990s ‘disinflationary boom’ period, due in part to global competition, demographics and technological advancement. This has important implications for Riverfront’s portfolio strategy:

– A global recession in the next 12-18 months is difficult for us to foresee, given the lack of runaway inflation and strength in consumer and business confidence –we believe this is positive for risk assets. We are overweight equities in our asset allocation portfolios, with an emphasis on international due to better growth prospects and lower imbedded expectations, in our view.

– Disinflationary growth is a positive backdrop for global consumers, who benefit from a stable cost and employment environment, as well as cheap funding costs created by low interest rates. Also, disinflation in commodity prices is an economic net positive, in our opinion, in regions that consume more commodities than they produce. Within our international selection, we are tilting towards consumer-facing industries such as consumer discretionary and staples, in commodity net-importing areas like the Eurozone and Asia.

– A wide range of potential central bank responses to the current economic environment are making currency prognostication particularly challenging, in our opinion; therefore we are employing relatively little foreign currency hedging relative to the US dollar in our portfolios at this time, keeping a close eye on currency technicals and fundamentals.

One recent controversy has centered around the timing and magnitude of the European Central Bank’s (ECB) tapering of quantitative easing (QE). Last Thursday, ECB head Mario Draghi went out of his way to highlight the sensitivity of the ECB to tightening financial conditions (i.e. rising bond yields and currency strength), hoping to convince markets he is not turning ‘hawkish’ given the improving economy. The foreign currency markets chose to focus instead on the improving economic signals, driving EUR/USD to a multi-year high above 1.16. Many now think the ECB will be working towards reducing stimulus soon.

However, we would sound a note of caution on this view; one of the challenges facing the European Central Bank (ECB) is that they have to set monetary policy for the ‘weakest link’ in the chain – as the chart on the left shows, inflation below the ECB’s stated mandate of 2% is not just an issue in Germany or France, but pervasive across the Eurozone. Thus we believe that Draghi and Co. wil act prudently with how quickly and definitively they move away from an accommodative stance. Across the world, the Bank of Japan actually lowered inflation expectations last week; a sign, in our opinion, that a QE exit in Japan is even further away. All of this adds up, in our opinion, to a monetary policy backdrop for international markets that remains conducive for further risk asset appreciation, despite concerns over a summer ‘taper tantrum’. 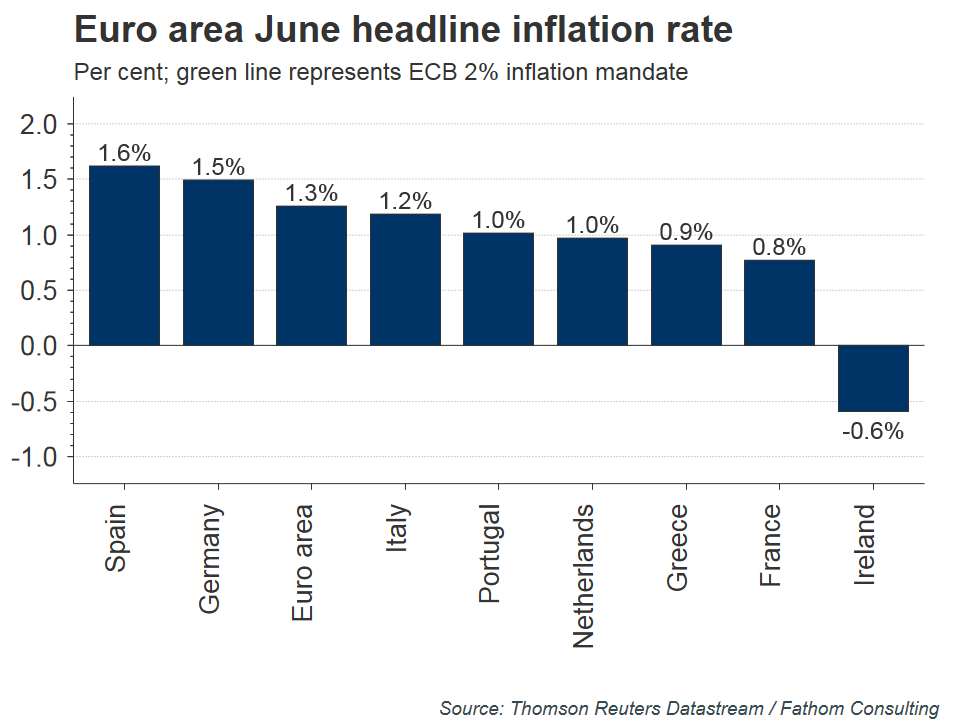 Riverfront has reduced our level of EUR hedging significantly over the past few months, as our conviction level surrounding the future direction of the EUR is lower than before. We believe interest rate differentials and accomodative relative monetary policy still point to a weaker EUR in the future, but lower political risk after the French election and stronger economic growth in the region have helped bolster near-term appreciation. Long-term valuation for the EUR is also lower than when the weakening trend in EUR/USD started in earnest in 2014.

A point on EUR strength; while in the near-term, a strong EUR may deteriorate earnings revisions for export-oriented companies in the Eurozone, we believe this short-term negative must be weighted against the powerful longer-term positives of lower political risk and stronger economic growth. It’s also it’s important to keep in mind that the historical precedent suggests that the best periods for European stocks relative to the US have tended to be during times of currency strength relative to the USD, not weakness. There are no assurances that trends can or will be duplicated in the future.

This theme of disinflationary growth also has major impact on consumer behavior, in our opinion. Much has been made of oil price weakness in 2017. While other economically-sensitive commodities such as copper have fared slightly better, a ‘disinflationary growth’ environment is likely to keep commodity prices of all types range-bound, in our view.

We believe this is actually an economic net positive for consumers and businesses in regions such as the Eurozone, Japan, China, and India, who consume more commodities than they produce. Since oil peaked in mid-2014, we have seen consumer sentiment generally improve in most of these areas, in part due to, in our opinion, disinflationary pressure in commodity prices. Consumer strength is crucial for global growth in our opinion, for the simple reason that the majority of the world’s GDP is created by regions who are net commodity importers. 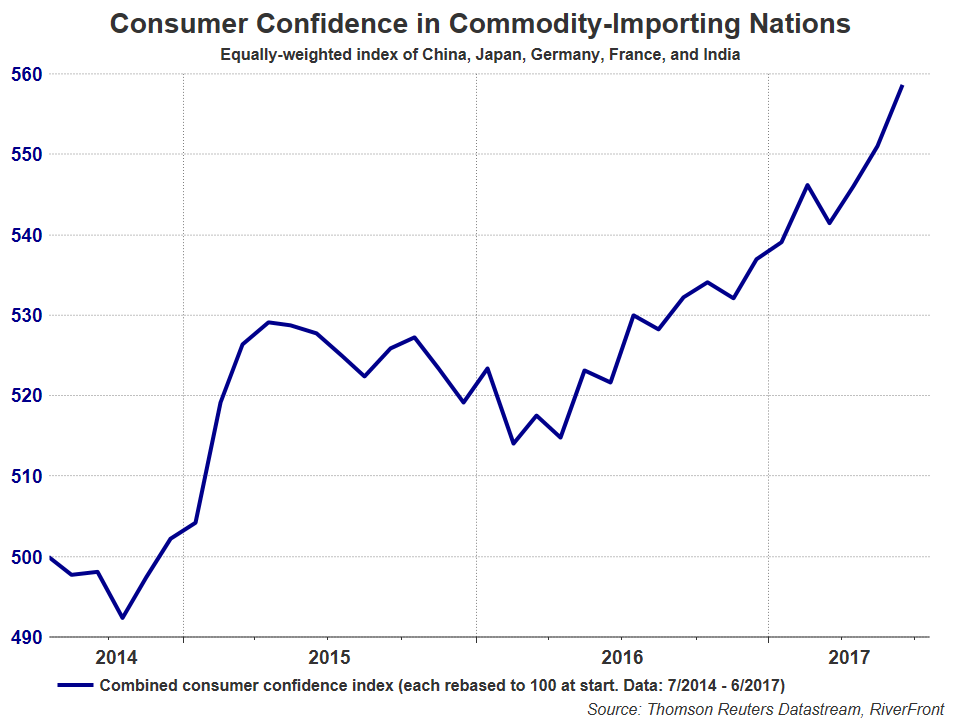