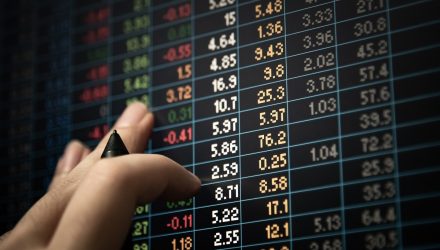 What had started out as a banner month of inflows for ETFs ended up completely reversing, as the coronavirus panic gripped investors who quickly liquidated positions to move to the sidelines and safety.

The Covid-19 spurred growth fears smashed global equities in the last two weeks of February, as just 12% global stocks now trade above their 50-day moving average, down from 50% mid-month. Markets notched their worst weekly performance since the financial crisis, and they are still sitting around those numbers as of early March.
The S&P 500 Index plummeted 11% in the last five days of the month, hitting a new record for the fastest correction in history. In just those five days, there were three days with more than a 3% daily decline, which represents the most for a five-day period since the US’s sovereign debt rating was downgraded in 2011. By the end of the month, only 3% of US stocks were trading above their 50-day moving average, in comparison to the 70% and 50%, respectively, from mid-month. This massive correction shows evidence of the enormous reversal of sentiment resulting from the uncertainty of the Covid-19 epidemic’s impact on global growth.
Related: The Fed is Making the Cut, But Wall Street Wants More
Sector flows were +$1.4 billion, led by $4 billion of inflows into defensive areas. A similar trend occurred in factors, as low volatility ETFs took in over $1 billion.
Given the mass exodus from stocks, it was unsurprising that defensive posturing was also notable with bond and gold ETF flows. Bond funds attracted $14 billion, even with the $6.3 billion of outflows from credit-sensitive ETFs, while gold ETFs took in $2 billion, with inflows on over 88% of the days.
The most successful ETFs were the more defensive areas. When the US market began to witness extremely heightened levels of volatility, as equities tanked by more than 11% from February 21st, defensive exposures took in $3 billion of inflows, while cyclical, which is generally more sensitive to growth, witnessed $4 billion of outflows. Financials were the hardest hit cyclical, while defensive bond-proxy Real Estate benefited the most from the downdraft.