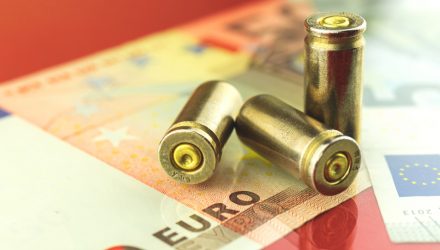 Russia’s aggression has fueled an arms race as European countries bulk up their military capabilities as a deterrent. For instance, German chancellor Olaf Scholz stated that Germany would almost double its military spending and acquire fighter planes made in the U.S. for the first time in decades, the Wall Street Journal reports.

Looking ahead, German funding will be set up immediately, and Scholz said that defense spending could increase in the coming years to above 2% of GDP, an increase from its current 1.53%, according to NATO statistics.

Germany has resisted raising military spending in the past due to its history and despite greater pressure.

“More resources for defence among U.S. allies in Europe combined with the challenge from Russia could contribute to the development of a larger, more capable.. European defence industrial base that could.. become more competitive with that of U.S.,” JPMorgan analyst Seth Seifman wrote in a note, according to Reuters.

“However, and in the near-term we see Germany’s announcement as an opportunity for U.S. defence contractors,” the strategists added.

Defense companies can see a direct benefit from the ramp-up in arms. For example, countries have pledged to provide more Stinger ground-to-air missiles for Ukrainian forces to repel the Russian advance, bolstering Raytheon Technologies, the manufacturer.

Lockheed Martin, the maker of the F-35 fighter jet, strengthened on news of broader increased spending. The company, along with Raytheon, also manufactures the patriot missile defense system that is set to be deployed with NATO battlegroups, the Guardian reports.

“If Germany is feeling pressure to bolster its military and defense systems in this way, other countries are likely to follow suit,” Investor Place said in a note. “This means that companies that produce military technology and weapons are likely to see a significant spike in demand throughout the coming months. Wall Street will be keeping a close watch on defense stocks as the industry prepares for a boom.”