You are at:Home»Equity ETFs»Defense ETF up as North Korea Denuclearization Faces Snags 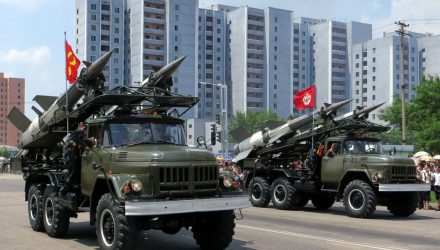 Interest in the iShares US Aerospace & Defense ETF (BATS: ITA) continues to climb as the denuclearization of North Korea faces snags with the country referring to negotiations with the U.S. as a “unilateral and gangster-like demand for denuclearization.”

I have confidence that Kim Jong Un will honor the contract we signed &, even more importantly, our handshake. We agreed to the denuclearization of North Korea. China, on the other hand, may be exerting negative pressure on a deal because of our posture on Chinese Trade-Hope Not!

Interest in aerospace and defense ETFs like ITA could get more trader interest should the denuclearization process face continued obstacles or worse, if North Korea balks on their commitment.  Until then, Pompeo hints that it will be nothing short of a long, arduous process.

“Now is the time for all of us, the State Department and others to deliver, to implement the agreement between President Trump and Chairman Kim,” Pompeo said. “To think this would happen in the course of a handful of hours would have been ludicrous.”