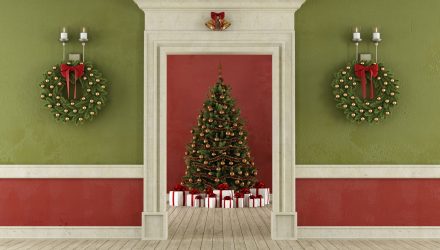 The capital markets were hoping for doves before Christmas, but it was on Dasher, on Prancer and on with more rate hikes by the Fed on Wednesday. As such, financial exchange-traded funds (ETFs) declined on the notion that more rate hikes could hurt business in 2019.

“The irony is that financials didn’t do well this year when rates are going up, it may be the case that financials do better in 2019 as the Fed backs off,” Mike Wilson, Morgan Stanley’s chief U.S. equity strategist.

The Fed didn’t pull any rabbit punches on the capital markets by raising interest rates another 25 basis points to a range of 2.25 to 2.50 on Wednesday. Following the decision, Federal Reserve Chairman Jerome Powell communicated that the central bank sees “growth moderating ahead.”

It was a good start to what could’ve been a more dovish tone, but Powell proceeded to take a different path.

Fed Not Feeling the Dove

Powell proceeded to sing the praises of the current economy. Backed by data showing solid growth and a robust labor market, Powell mentioned that the “U.S. economy has continued to perform well” and “signs of a more robust economy proved accurate.”

Furthermore, the Fed sees two more rate hikes in 2019, which may have been the negative catalyst that brought banks into the red zone. With the major indexes responding negatively to the mention of further rate hikes, all sectors were hoping for a more dovish Fed.