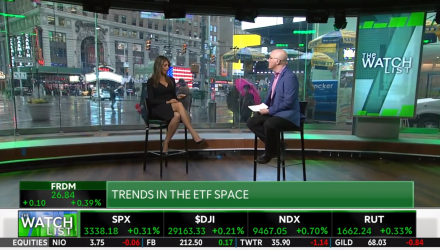 ETF Trends CIO and Director of Research Dave Nadig appeared on TD Ameritrade Network on Monday to speak with anchor Nicole Petallides about the state of ETFs and what to keep an eye on for 2020.

Nadig started by noting that many people are looking to play defense, mostly thanks to how the Coronavirus has people thinking about supply line disruption. That means people are reconsidering their investments in China, which has become an increasingly large part of every emerging market index, except for one.

This would be the Alpha Architect Freedom 100 Emerging Markets ETF (FRDM), which reweights emerging markets based on their freedom scores. It skips out on China entirely. FRDM has more of a European focus. As Nadig adds, FRDM still provides some broad exposure, with areas such as Taiwan and South Korea still in reach. There are also areas like Chile and Latin America, along with countries like Poland, among others as well.

This makes for a different take on emerging markets, and Nadig doesn’t believe investors should play defense by selling everything. “It’s always a bad idea,” he states. Still, it’s essential to be a little prudent in thinking about what may be less impacted in the emerging market exposure. This should be a simple call.

Seeking Out The Innovators

Shifting gears, Nadig does talk about the success of bond flows, overall, in the ETF market. However, getting more focused, he went into detail about another area with S&P exposure. Specifically, Nadig delved into the Innovator S&P 500 Buffer ETF (BFEB). It’s part of a series of funds that, for each month, investors can use to get some downside protection in exchange for capping the upside.

BFEB, which launched at the beginning of February, provides 13% exposure up, over a year, for the S&P. Beyond that, an investor wouldn’t get the rest of the return but is still insulated from the first 9% down in the S&P. “It’s a way of putting guard rails on your equity exposure. So, it’s another way of playing defense here,” Nadig explained. Similar explanations can be provided for the Innovator S&P 500 Power Buffer ETF (PFEB) and the Innovator S&P 500 Ultra Buffer ETF (UFEB) as well.

“They go deeper into spectrum,” Nadig notes, “So you’ll get more downside protection, but you’re going to give up more of the cap. You can go to Innovator’s website, and you’ll find out for each one of those funds, exactly how much cap you have and how deep your protection is going to be.”

Moving on, addressing Coronavirus once again, Petallides brought up an ETF that could help consumers protect themselves. This would be the iShares Dow Jones Consumer Services ETF (IYC). Nadig belives, when looking at the companies that supply teams are going to get hit, they tend to be hardware manufacturers and tech companies doing business out of Japan. IYC serves as an interesting way to stay invested their, while also bringing in exposure to more prominent companies like Netflix, Disney, and retailers like Amazon and Walmart, who may not be immune, but are also less impacted by the supply train.