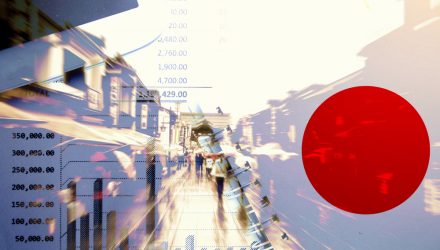 As the Bank of Japan maintains its ultra-low interest rate policy, investors who are looking into Japanese equity markets should consider a currency-hedged country-specific exchange traded fund.

The CurrencyShares Japanese Yen Trust (NYSEArca: FXY), which tracks the yen against the U.S. dollar, fell 2.0% on Thursday.

The BOJ reaffirmed its commitment to maintaining low interest rates despite rising inflationary pressures, contributing to the yen depreciating to more than 130 against the U.S. dollar for the first time since April 2002, the Wall Street Journal reports.

In contrast to other developed markets like the U.S. Federal Reserve and European Central bank, which are both moving toward tighter monetary policies with aggressive interest rate hikes in the U.S., Japan’s central bank is keeping its loose monetary policy outlook to maintain economic growth.

“While central banks in the U.S. and Europe are moving toward monetary tightening or rate increases, the Japanese economy is still on the road to recovery from the impact of the Covid-19 pandemic,” BOJ Gov. Haruhiko Kuroda said at a news conference. “It is most important to support economic recovery by patiently continuing monetary easing.”

On Thursday, the BOJ said it would buy 10-year Japanese government bonds at a yield of 0.25% every business day to keep pressure on yields, indirectly maintaining a low rate in Japan. The central bank has already frequently taken steps this month to preserve the capped low rate.

While the actions have accelerated the depreciation of the yen against other global currencies, the weaker yen currency makes Japanese exports more competitive on the global market.

However, some are worried that the precipitous decline in the yen currency could do more harm than good, especially for Japanese consumers who are seeing higher prices on basic goods.

“Because exporters are struggling with supply constraints, they are likely to see less of a benefit from the price competitiveness brought about by a weak yen,” Naomi Muguruma, an economist at Mitsubishi UFJ Morgan Stanley Securities, told the WSJ.