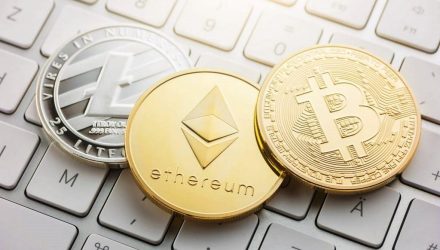 While short on market volatility, 2017 suffered no shortage of excitement. Major U.S. indices went on a tear with both the S&P 500 and Dow Jones Industrial Average (DJIA) setting all-time record highs. However, the biggest theme of 2017 was the breakout year in cryptoassets.

Cryptoassets took the market by storm. At the start of the year, the total value of cryptocurrencies stood at just $15 billion; but by the end of the year, that number had reached $500 billion. While Bitcoin dominated the headlines, the parabolic appreciation of cryptos in 2017 was due in large part to the emergence of competing coins. Just one year ago, Bitcoin made up 90% of the cryptocurrency market and was the lone coin with a total value of more than $1 billion. Now, there are 36 coins with a total value greater than $1 billion and Bitcoin accounts for less than 40% of the market.

One may ask how an asset that returns more than a 1,000% in a year loses a vast majority of its market share. As the graph below shows, Bitcoin’s astonishing performance doesn’t even rank in the asset class’s top 10. Such a phenomenon could only happen in the volatile world of cryptocurrencies.

Not to be outdone, the U.S. stock market had a stellar year as well. Fueled by signs of global economic expansion and the hope for tax reform, which ultimately came at year’s end, the DJIA hit 71 record highs. That eclipsed the previous mark of 69 that was set in 1995 when the DJIA closed above 5,000 for the first time. The S&P 500 set records of its own. For the first time, the index saw a positive return every month for an entire calendar year. To put that into perspective, despite positive monthly returns occurring 60% of the time over its 147-year history, the S&P 500 has had a streak of 12 consecutive months or more with positive returns just six times — none of which happened in a calendar year. This makes the possibility of such an event recurring very unlikely, but nothing is impossible.