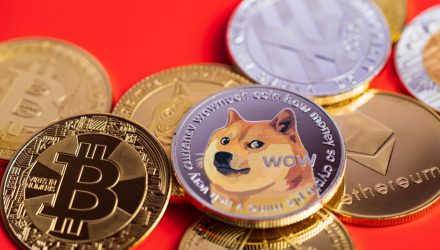 What’s the Most Searched Cryptocurrency in the U.S. This Year?

With bitcoin reaching an all-time high, it might seem that the leading cryptocurrency should be the most-searched in 2021. However, it appears that internet searchers are doggedly looking for information on Dogecoin.

Despite starting out as a joke, the meme coin finds itself situated in the top 10 cryptocurrencies according to market capitalization. It’s a use case in which fundamental analysis can be thrown out the window, highlighting the power of social media.

The advent of the coin has spawned a strong following via social media, with Dogecoin faithful referring to themselves as part of the “Doge army.” Even if the coin’s use case may not have the same valuation as ethereum or the scarcity store of value as bitcoin, the cryptocurrency still manages to defy all odds.

“The research by leading software company, Bacancy Technology, revealed that Dogecoin receives an average of seven million Google searches per month,” a press release noted. “What was originally a joke coin created in 2013 by software engineers Billy Markus and Jackson Palmer, is now considered as a legitimate investment for the public.”

Dogecoin managed to beat out bitcoin despite the latter’s fanfare surrounding the release of a U.S.-based futures ETF. Rising interest in cryptocurrencies by traditional financial markets can help alternative coins (or alt coins for short) like Dogecoin to garner more visibility.

Given the way users are already searching for Dogecoin information, that extra dose of visibility may not be necessary.

“Bitcoin follows Dogecoin as the second most searched for cryptocurrency in the US and currently receives an average of 4,700,00 Google searches per month,” the press released added.

For certain hardcore bitcoin and ethereum maximalists, Dogecoin might be nothing but a joke. Nonetheless, when you combine the reach of social media and celebrity endorsements, Dogecoin and other meme coins are a force to be reckoned with in their own right.

“Despite being created as a joke, Dogecoin continues to attract huge amounts of interest, which is no doubt spurred on by high profile figures such as Snoop Dogg, Mark Cuban and many more discussing the cryptocurrency,” a Bacancy Technology spokesperson said. “Its rise to the receiving even more searches than Bitcoin is also driven by trading and investing apps which make it easy for members of the public to trade stocks and currencies without needing any experience or financial knowledge.”