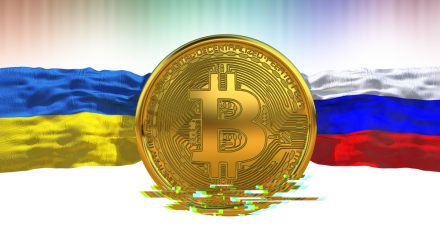 It’s certainly not the scenario that cryptocurrency aficionados were hoping for to highlight the usage case for bitcoin, but Russia’s armed invasion of neighboring Ukraine is providing another avenue for the unconvinced to see bitcoin shine.

That could provide some support for assets such as the Grayscale Bitcoin Trust (GBTC), which is the dominant name among bitcoin-backed index funds. Data out Thursday indicate that some bitcoin backers are using the largest cryptocurrency to support a Ukraine non-government organization (NGO) that, in turn, is providing financial assistance to that country’s armed forces.

“New data from blockchain analytics firm Elliptic shows that over a 12-hour window Thursday, nearly $400,000 in bitcoin was donated to Come Back Alive, a Ukrainian nongovernmental organization providing support to the armed forces,” reports MacKenzie Sigalos for CNBC.

That $400,000 is a scant percentage of bitcoin’s market capitalization of $733.43 billion, as of late February 24, but the Ukraine news is proving notable because the digital currency was higher by almost 11% for the 24-hour period ending 11 PM Pacific time on February 24.

“Activists have deployed the crypto for a variety of purposes, including equipping the Ukrainian army with military equipment, medical supplies, and drones, as well as funding the development of a facial recognition app designed to identify if someone is a Russian mercenary or spy,” according to CNBC.

Russia’s invasion of Ukraine highlights other usage cases for bitcoin, particularly as a potential alternative to traditional hard currency. For example, Ukraine’s central bank, in an effort to prevent a run on its banks, is limiting customer withdrawals. On the other side of the ledger, sanctions by the West, including the U.S., could crimp the finances of Russians, preventing them from accessing rubles. In time, that could boost the case for bitcoin.

“Another group, the Ukrainian Cyber Alliance, has received close to $100,000 in bitcoin, litecoin, ether and a mix of stablecoins over the last year. Since 2016, Alliance activists have engaged in cyberattacks against Russian targets, says Elliptic,” notes CNBC.

GBTC, which tracks the CoinDesk Bitcoin Price Index (XBX), debuted in September 2013 and has $24.68 billion in assets under management, according to Grayscale data. Each share represents 0.00092851 of one bitcoin.