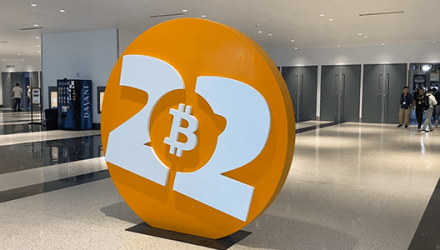 The Biggest Reveals From Bitcoin 2022

An estimated 30,000 people attended last week’s Bitcoin 2022 conference in Miami, which is rapidly becoming a major global crypto-finance hub. Miami mayor Francis Suarez, who takes his salary in Bitcoin, kicked off the event by unveiling a giant cybernetic, laser-eyed bull statue modeled after the iconic Charging Bull installation that stands near the New York Stock Exchange (NYSE)—a not-so-subtle hint that the city wishes to brand itself as the “crypto Wall Street.”

It was a great pleasure seeing everyone from HIVE Blockchain Technologies, which helped sponsor the conference. I want to acknowledge their hard work in making HIVE among the most efficient, most profitable Bitcoin and Ether miners.

If there’s one theme that ran throughout the entire four-day event, it’s that we’re still so early. I believe that buying Bitcoin today is like investing in internet stocks back in 1995. There’s incredible upside potential, and for those who worry that Bitcoin is too expensive at $40,000, just wait another five to 10 years.

Ask yourself this: Do you think Bitcoin adoption and ownership is going to go up over time, or down? At the moment, ownership is still relatively limited. In the U.S., for instance, only one in five people holds Bitcoin. But as its use cases become more obvious, and more people join the network, this figure should increase. This is what’s known as Metcalfe’s law.

Bitcoin’s critics say it has no utility and it’s wasteful. Warren Buffett calls it “rat poison squared.” The same type of FUD, which stands for fear, uncertainty and doubt, was being spread about the internet in 1995. If you had listened to people like astronomer Clifford Stoll—who in a now-famous Newsweek op-ed said it was “baloney” that we’d ever shop, read the news or attend school online—you’d have missed out on investing in Amazon, Google and many other companies you likely interact with on a weekly or even daily basis.

Just as they did back in the 90s, it’s the younger investors who seem to get it the most. The average user age of the commission-free Robinhood trading app is around 32. These investors have made Bitcoin the number one recurring buy asset on Robinhood—higher than Apple, higher than Tesla, higher even than broad-based equity index ETFs.

But didn’t internet stocks crash in 2000? Yes, and many of the companies that survived are still around today and highly profitable. Besides Amazon, there’s eBay, Booking Holdings, Priceline and more.

According to CoinMarketCap, some 18,760 cryptocurrencies are currently being traded on more than 500 different exchanges. If a similar “dotcom bubble” were to burst right now, 99.99% of these “sh*tcoins,” as they’re called, would disappear overnight.

Bet on the winners. For me, that’s Bitcoin and Ether. Everything else is pure speculation.

I attended so many great presentations and panels last week that it’s difficult for me to single any out, but I will try my best. Three different announcements come to mind.

The first announcement comes from Robinhood. The company’s chief product officer, Aparna Chennapragada, took the stage to tell everyone that, at long last, Robinhood would roll out digital wallets to as many as 2 million users who have been on a waitlist. What this means is they can now send and receive cryptos, including Bitcoin, peer-to-peer. In addition, Robinhood plans to integrate the Lightning Network, which will make such transactions instantaneous and virtually free.

The second announcement has to do with mass adoption. At last year’s conference, we learned that El Salvador would move to become the world’s first country to adopt Bitcoin as legal tender, something it’s now accomplished. Last week we learned that two new jurisdictions are following in its footsteps. Prospera, a new special economic zone in Honduras, just officially adopted Bitcoin, as did the autonomous Portuguese archipelago known as Madeira, home to more than a quarter of a million people. And believe it or not, Mexico may be next. Mexican senator Indira Kempis Martinez told the thousands in attendance she was working on legislation that would make Bitcoin legal tender in her country, where a third of adults are unbanked and lack access to credit.

And finally, I want to mention an exciting announcement made by Strike CEO Jack Mallers. In a highly entertaining, breathless presentation, Mallers announced that his firm had partnered with not only Shopify but also the world’s biggest point-of-sale systems to make it possible for consumers to pay for a Big Mac at McDonald’s or wine at Costco using Bitcoin. Mallers framed this innovation as the first real evolution in payments processing technology since 1949, when the Diners Club credit card was conceived. Hundreds of household-named stores and restaurants are expected to begin accepting Bitcoin as payment, which will eliminate all third-party intermediaries and fees.

It’s truly an exciting time, and I hope you’re participating. Cathie Wood, I think, said it best. During her panel with Michael Saylor, the ARK Invest chief called Bitcoin the “first open-source, global private digital rules-based monetary system in the history of the world.” We’re only just now starting to realize the full implications of that.

Watch my interview live from the conference with FOX Business’s Liz Claman by clicking here!

Holdings may change daily. Holdings are reported as of the most recent quarter-end. The following securities mentioned in the article were held by one or more accounts managed by U.S. Global Investors as of (12/31/2021): Amazon.com Inc., Apple Inc., Tesla Inc., Booking Holdings Inc., Costco Wholesale Corp.