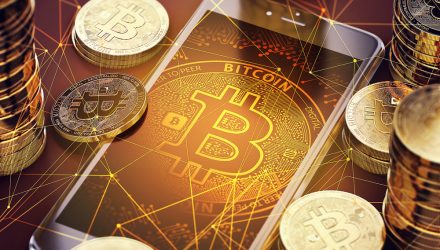 Bitcoin continues to surge after Tuesday’s big day, where it crept past $50,000 for the first time since El Salvador began accepting it as legal tender. Today it has rallied 8%, reclaiming its $1 trillion dollar valuation.

This week’s rally has the cryptocurrency up 34%, which is good news for the Bitcoin Strategy ProFund (BTCFX). BTCFX invests primarily in Bitcoin futures contracts, which generally correspond with the performance of bitcoin. The ongoing rally has some investors speculating that Bitcoin could reach its mid-April high of $65,000 – a potential upside of 20%.

“We expect short-term overbought conditions to be weathered long enough for a test of minor resistance near $52.9K, a breakout above which would target the all-time high,” said Katie Stockton of Fairlead Strategies in a Tuesday note. Bitcoin has momentum in the short, medium, and long-term, according to Stockton. “The long-term outlook for bitcoin is bullish, noting bitcoin is above its rising weekly cloud and has positive long-term momentum,” Stockton noted.

The universe of digital assets is “too large to ignore,” wrote Bank of America strategists, including Alkesh Shah and Andrew Moss. “Our view is that there could be more opportunity than skeptics expect.”

Once regulation of the currency sets in, that could spur further growth as much of Bitcoin’s volatility comes from the uncertainty of the cryptocurrency space. Broad acceptance of digital assets in the form of regulation is likely to stabilize and strengthen them.

Noted value investor Bill Miller is also bullish on Bitcoin, comparing gold to the horse and buggy and Bitcoin to the Ferrari in a conversation with Morgan Stanley’s Marvin McIntyre. Miller is most known for his time at Legg Mason Capital Management Value Trust, where he famously beat the S&P 500 every year from 1991 through 2005.

Despite the crackdown in China, more and more countries are signaling support for cryptocurrencies. A week and a half ago, the first Bitcoin EU fund was announced in France. While the holy grail of a Bitcoin ETF still seems to be on the horizon, mutual funds such as BTCFX will be the standard-bearers for cryptocurrency as digital assets transition from upstart outsider assets into widespread accepted cornerstones of a healthy portfolio.