You are at:Home»Crypto Channel»Palestinian Monetary Authority Considering a Digital Currency 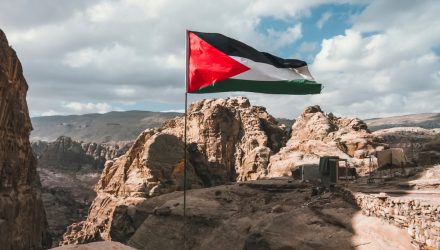 The Palestine Monetary Authority is considering a digital currency, according to a recent Bloomberg report.

According to Feras Milhem, the Governor of the Palestinian Monetary Authority, in an interview with Bloomberg Television, the hope is to eventually institute a digital currency for payment systems both within Palestine and with Israel and other countries.

Under the 1995 Oslo Accord, Palestine agreed not to create its own currency and to this day Palestinians primarily use the Israeli shekel, although the Jordanian dinar and U.S. dollar are used in some transactions.

Because Israel limits the number of shekels Palestinian banks can transfer back to Israel and prohibits large cash transactions under anti-money laundering laws, Palestinian banks often must borrow to cover foreign exchange payments and maintain an excess of shekels.

The Palestinian economy is significantly constrained by Israeli restrictions and is therefore reliant on aid money and remittances from Israel.

Could a Palestinian Digital Currency Work?

The complex political and macroeconomic conditions under which Palestine exists might not allow for a Palestinian currency to exist as a true means of exchange, according to Raja Khalidi, the director of the Palestine Economic Policy Research Institute.

Former senior advisor to the Bank of Israel governor, Barry Topf, has also expressed doubts that a Palestinian digital currency could become a viable means of exchange.

Issuing a digital currency could, however, be a powerful political symbol of monetary independence from Israel, Khalidi said.

Two years later, the Palestinian Prime Minister Mohammad Shtayyeh announced that his government was considering cryptocurrency as an alternative to the Israeli shekel.

Palestine is not the only country to consider the potential of a national digital currency. Many countries including China, Thailand, Japan, and Sweden have expressed interest in developing their own digital dollars.

Even the U.S. is in the process of examining the potential of a fed-issued digital dollar.

Meanwhile, other countries, such as El Salvador, are going a different route and approving existing cryptocurrencies (namely Bitcoin) as official legal tender.

According to a 2018 Coindesk report, some Palestinians do use Bitcoin, particularly for international transactions, but there are significant obstacles to using the cryptocurrency in everyday transactions – namely a lack of access to online crypto exchanges that work with local banks.