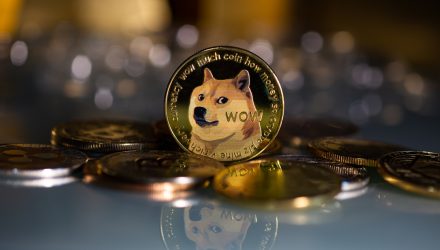 October was certainly a bullish month for cryptocurrencies, but it was also highlighted with a pair of meme tokens that were engaged in a dog fight.

Dogecoin and its rival Shiba Inu are both jockeying for a position in the cryptocurrency market capitalization space. Currently, it’s Shiba Inu above Dogecoin, but that could all certainly flip given the volatile nature of these meme coins.

The newest kid on the block, Shiba Inu, or simply Shib, was dubbed as the “Dogecoin killer” when it first came on the scene, and now it’s starting to live up to its moniker. Backed by a strong social media presence, the cryptocurrency has risen from relative obscurity to its current top 10 ranking in terms of market cap size.

“Popular meme tokens saw large gains in October as cryptocurrency market sentiment improved. Both SHIB and DOGE posted record highs and are now among the top 10 largest digital assets by market valuation, according to CoinMarketCap,” a Coindesk article summarized. “The dog-themed coin SHIB’s 765% gain in October made it the month’s top-performing cryptocurrency among those with a reported market capitalization of at least $10 billion.”

The meme coin battle comes at a time when both bitcoin and ethereum reached all-time highs in October. While maximalists of both leading cryptocurrencies may view meme coins as nothing more than a joke, their current market cap standings show that they have carved out their own niche in the crypto space.

Bitcoin is praised for its scarcity and store of value as the decentralized finance’s version of digital gold, while Ethereum is praised for its use case as a blockchain ecosystem, but how are the meme coins getting their backing? As mentioned, their mere social media presence alone gives them strength in numbers.

Just go on Twitter and you’ll see loyalists professing their allegiance to the “Dogecoin army” or “SHIB army.”

“Altcoins like [Shiba Inu] are primarily community-based, meaning their success is largely dependent on the success and growth of its community, instead of its utility,” said Douglas Boneparth, certified financial planner and president of Bone Fide Wealth.

With institutional interest for bitcoin and ethereum, it may be that these currencies now belong to the established and well-to-do in the eyes of the general populace. Either way, the rising popularity of meme coins (trading for mere cents or, in the case of SHIB, under that) gives investors young and old ingress to a still-nascent cryptocurrency space where $60,000 for one bitcoin token is out of reach for most.