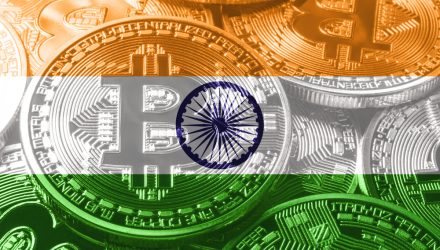 India might be following China with tougher regulations against cryptocurrencies, which have stumbled in recent weeks.

“India is set to propose a new cryptocurrency bill in parliament, and investors are trying to make sense of what this might mean for the future of virtual coins in South Asia’s largest economy,” CNBC reports. “Lawmakers may ultimately opt to impose tough regulations on the crypto market instead of an outright ban on private coins, according to a top executive at Zebpay, one of India’s largest crypto exchanges.”

The news comes as leading cryptocurrency bitcoin has fallen close to 9% the past month. In October, bitcoin touched a new all-time high after the debut of a bitcoin futures exchange traded fund (ETF), which gave digital currencies some legitimacy in traditional finance.

According to the CNBC report, a parliamentary bulletin revealed the government’s plans to introduce a bill that would ban private cryptocurrencies in favor of a digital currency backed by the country’s central bank. The bill did say that it would allow for certain exceptions that would promote the use of underlying technology of cryptocurrencies, which is more than likely alluding to blockchain technology.

“My belief is that we will have some kind of coherent regulation, but on the tougher side,” said Avinash Shekhar, co-CEO of Zebpay.

“South China’s Hainan Province will step up efforts to promote the testing and use of the digital yuan in cross-border trade and financial services as part of its development plan for the Hainan Free Trade Port, according to a five-year plan issued on Tuesday,” Global Times reports. “Analysts noted that Hainan may further explore application scenarios of the digital yuan through more overseas transactions and trade, while expanding the ongoing testing of the digital currency within the province.”

An CNBC report from earlier this year notes that India could be looking to do the same for the rupee with trials beginning during the month of December. The latest moves by the government to crack down on private crypto could be the steps toward that direction.