You are at:Home»Crypto Channel»Futures Playing an Increasingly Important Role in Bitcoin 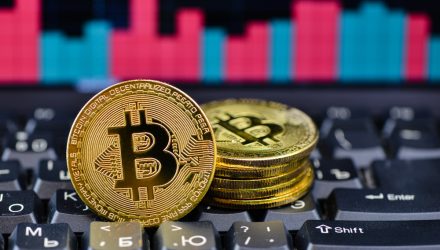 A Bitcoin exchange traded fund, assuming one (or more) is approved in the U.S., would be considered a derivative. For now, Bitcoin futures are the primary derivative linked to the world’s largest cryptocurrency. They are playing an increasingly prominent role in the Bitcoin market.

“As has often been the case in the past, the growth and gradual maturation of cryptocurrency markets has naturally generated interest in derivatives and other sources of leverage. Though futures trade against a range of pairs, Bitcoin unsurprisingly dominates this nascent marketplace,” according to JPMorgan research.

In December 2017, Bitcoin futures debuted on the Chicago Board Options Exchange (CBOE), with CME Group following suit just a few days later. The derivatives linked to the largest digital currency by market value are seeing a steady rise in activity

“With the launch of CME bitcoin futures contracts in late 2017, institutional investors in the United States began to have access to bitcoin derivatives exposure, but access to ‘spot bitcoin’ has been harder to come by, even as the bitcoin market cap has increased more than 200 percent above the 2017 peak,” reports Bitcoin Magazine.

Derivatives help increase liquidity and improve markets for an asset category by allowing investors to bet on ups and downs of an asset, evening allowing individuals to adopt market-neutral strategies. They are also a key component in the creation of many futures-backed ETFs utilized by a range of investors

JPMorgan “analysts offered up potential reasons for why the contango has remained so large. Among the possible explanations provided by JPMorgan is counterparty and repatriation risk in offshore markets, complications with obtaining spot BTC exposure in the legacy system and, subsequently, the Grayscale Bitcoin Trust (GBTC) being a main source of BTC exposure on the street (and all of the premium/discount problems that come along with the investment vehicle),” according to Bitcoin Magazine.

When a Bitcoin exchange traded fund comes to market in the United States is anyone’s guess. The fate of that proposition lies in the hands of regulators, but what is clear is that the competition is drawing some big names in the fund industry. With some movement on the filing front last week, nine issuers are looking to launch a Bitcoin ETF.

“JPMorgan believes that the introduction of a bitcoin exchange-traded fund (ETF) will compress the yields offered by the trade, as a liquid investment vehicle that trades at net asset value (NAV) will give investors the access to ‘spot BTC’ that they need in order to execute the arbitrage trade,” concludes Bitcoin Magazine.