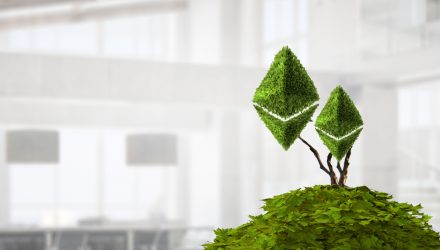 The Ethereum Foundation, which leads development of ether, the biggest crypto asset after Bitcoin, announced in May that it would be changing its underlying infrastructure to reduce carbon emissions.

The environmental impact of cryptocurrencies, especially Bitcoin, is a major concern cited by crypto critics. But even crypto fans like Elon Musk have expressed concerns about the massive energy needed to mine Bitcoin.

So how exactly is Ethereum planning on cutting carbon emissions?

Ethereum, like Bitcoin, and most other cryptocurrencies, uses a “proof-of-work” system in order to ensure the security of the system. In a proof-of-work system, crypto miners with specialized computers must use up a lot of energy to solve complicated math problems in order to validate transactions.

Ethereum is planning on switching to a “proof-of-stake” system later this year. In this model, “stakers,” or people who already hold some ether (the Ethereum network’s currency), will be the ones validating transactions. Validators will be chosen at random to check and confirm blocks they have not created and lose some, or all, of their stake for failing to validate a block.

The switch is estimated to cut the energy needed by the Ethereum network from 5.13 gigawatts of power to about 2.62 megawatts, according to Ethereum Foundation researcher Carl Beekhuizen in a Guardian article last month.

However, just because Ethereum is making steps to become less environmentally taxing does not necessarily mean it’ will surpass Bitcoin’s status as the leading cryptocurrency. This is because Bitcoin and Ethereum are inherently different cryptocurrency systems.

Bitcoin is first and foremost a cryptocurrency with a limited supply. Bitcoin has a hard-coded cap of 21 million coins, with the final coin likely to be mined around 2140.

Ethereum’s cryptocurrency, ether, on the other hand, does not have a fixed supply cap. Instead, it has a fixed issuance schedule that has changed multiple times – and will continue to do so as developers seek to reduce the supply of ether. The transition to proof-of-stake will help by reducing the issuance of ether to less than 1% per year.

Ethereum itself is fundamentally a De-Fi platform meant to help developers build and publish smart contracts and distributed applications, all of which can be paid for in ether. The popularity of Ethereum as a De-Fi platform has helped ether’s rise as a cryptocurrency.

However, ether is now gaining acceptance as a secondary cryptocurrency at some businesses. Ethereum has outperformed Bitcoin for much of the year, although both cryptos have been down over the past month.

In early May, VanEck filed for an Ethereum ETF, which would be the first of its kind in the U.S.