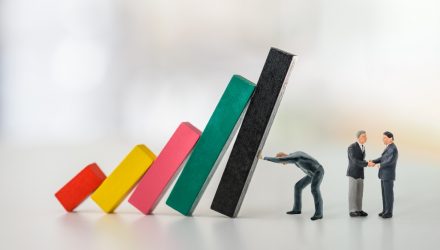 Trading of the ProShares Bitcoin Strategy ETF (BITO) was temporarily halted on Wednesday as investors, panicked by rumors that crypto exchange Binance might back out of a deal to buy rival FTX, triggered the limit up limit down rule as they left the ETF.

Binance CEO Chanpeng Zhao had tweeted on Tuesday that Binance had signed a non-binding letter of intent to acquire FTX and help solve its liquidity crunch, a lifeline for an industry in the midst of a difficult crypto winter. Bitcoin as well as cryptocurrencies solana and ether dropped from late Tuesday into Wednesday due to ongoing concerns about the state of crypto and rumors about the FTX deal.

“Today’s brief trading pause is a market mechanism that applies to all U.S.-listed equities and ETFs, designed to protect investors in volatile markets,” a ProShares spokesperson told VettaFi. “Within minutes, BITO resumed trading and continued to perform as designed. As it has since inception, BITO’s performance closely tracked the price of spot bitcoin before and after the pause.”

BITO stopped trading just after 10:30 AM but was trading again within the hour, with bitcoin futures dropping by more than $1,000 in value in that time. Later in the afternoon, Zhao followed up his Tuesday tweet to share that the deal was off.

There are paths ahead for bitcoin should investors get the answers they’re looking for about the purported FTX deal, with the currency’s correlation to tech stocks having dropped a bit earlier this month.

Still, investors should do their research and be sure about how they want to use their crypto exposures to get the best out of their digital assets holdings.

“Cryptocurrency-related investments remain volatile even inside an ETF, making it important for advisors and end clients to ensure they understand the underlying liquidity of the product before making a trade,” said VettaFi head of research Todd Rosenbluth.

BITO saw its returns increase over one month compared to its returns over the last three months, up to -6.9% from -21.5% over three months. The actively managed ETF charges 95 basis points for its bitcoin futures approach, having taken in $25 million in one-month flows. The ETF had dropped 13.3% Wednesday as of press time. Whether the FTX deal rumor is true or not remains to be seen.