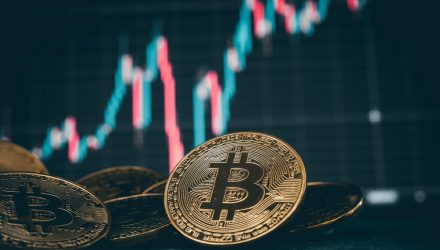 One of the reasons some investors embraced bitcoin is due to the perception that it’s not heavily correlated to traditional asset classes, namely stocks and bonds. There have been instances when that is the case, but for a significant portion of this year, bitcoin has been nearly joined at the hip with stocks, and that’s been to the detriment of the former. In the process, exchange traded funds such as the Invesco Alerian Galaxy Crypto Economy ETF (SATO) and the Invesco Alerian Galaxy Blockchain Users and Decentralized Commerce ETF (BLKC) have been pressured.

However, in what could amount to good news for BLKC and SATO, mounting data suggest that bitcoin’s correlation to stocks retreated in recent weeks.

“The cryptocurrency, which has been closely correlated with tech stocks for much of its torrid 2022, is staging one of its strongest efforts yet to break away,” reported Reuters. “Its 30-day correlation with the Nasdaq slid to 0.26 last week, its level lowest since early January, where a measure of 1 indicates the two assets are moving in lock step.”

In what could potentially be another positive sign for BLKC and SATO — both of which are equity-heavy ETFs — bitcoin’s volatility ebbed in recent weeks as its price nudged higher. Sure, the largest cryptocurrency needs to more than triple in value to reclaim its all-time high, but easing volatility coupled with decreasing correlations to stocks could play a part in the digital asset’s rebound.

“The nascent uncoupling does indeed coincide with a period of comparative calm and consolidation for the teenage cryptocurrency a year after it began its epic nosedive from the heady heights of $69,000 hit in November last year,” according to Reuters.

Another point that could bode well for bitcoin and ETFs such as BLKC and SATO is that crypto investors remain devoted. Many bitcoin believers haven’t sold even though the digital asset’s 2022 price action has been weak. Importantly, that’s held true in recent months, confirming interest in crypto remains sturdy.

“The dollar wealth held in bitcoins that haven’t been traded for three months or more is at an all-time-high, indicating accumulation by long-term holders or ‘HODLers’, according to blockchain data firm Glassnode. The name for that group of diehard crypto investors emerged years ago from a trader misspelling ‘hold’ on an online forum,” noted Reuters.