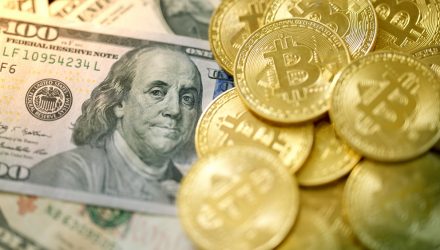 Bitcoin’s Correlation to Equities Is Rising

Digital currencies, including bitcoin, are usually considered an alternative asset class. Typically, alternative assets aren’t highly correlated with traditional fare, such as stocks and bonds, but there are occasions when that shifts.

These days, bitcoin is sporting elevated correlations to stocks, but that’s not necessarily an indictment of exchange traded funds such as the Valkyrie Bitcoin Strategy ETF (BTF). Currently, the 90-day correlation between the largest digital currency and the S&P 500 is as high as it’s been since October.

Bitcoin displaying elevated correlations to stocks isn’t negative commentary on BTF. After all, bitcoin is viewed by some as a risk asset, which is the same label applied to equities. However, there may be more to the story, and it could prove positive for funds like BTF.

Some experts argue that bitcoin’s increasing correlation with stocks is a sign that the former is taking on one of the latter’s most pertinent traits: inflation-fighting capabilities.

“The rising correlation comes as some analysts in traditional financial markets are starting to argue that stocks might actually serve as a decent hedge against inflation – because companies could theoretically raise prices to protect their profit margins,” reports Omkar Godbole for CoinDesk. “It’s a shift in focus that brings the stock market narrative closer to that of bitcoin, which has long been viewed by many investors as a potential hedge against fast-rising prices or a depreciating U.S. dollar.”

Adding to the case for BTF is the fact that bitcoin is trading higher since the Federal Reserve raised interest rates last week. That’s something to ponder, as many market observers are speculating that the Fed could ratchet up the intensity of its tightening efforts with a 50-basis point hike, which was seen as likely at the May meeting.

Still, there are bitcoin bulls who want the asset to be a store of value like gold. That’s being hindered by geopolitical events and macroeconomic concerns, according to CoinDesk.

“Bitcoin is a volatile asset, and in times of uncertainty, harnessing that volatility – which is usually a feature, not a bug – is difficult enough to dissuade even the most experienced volatility traders. This is especially acute in the current market, given that the uncertainty is driven largely by the war in Europe, and it is hard to predict outcomes when we do not know if the news emerging from the conflict zone is trustworthy,” notes Noelle Acheson, head of market insights at Genesis Global Trading, in a social media post.