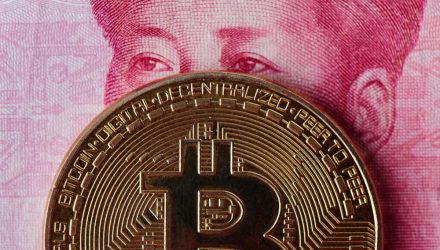 Bitcoin tumbled to a two-week low to start the week after news was released that China has intensified its suppression of cryptocurrency mining.

The world’s biggest digital currency sank to $31,760 Monday morning, dropping below $32,000 for the first time since June 8, according to data from Coin Metrics. It has been trading near its January lows for the past few weeks. Pressure on the cryptocurrency has affected smaller rivals like ether and XRP, which have plummeted 7% and 8.5%, respectively.

The moves in the cryptocuurency hurt funds like the Simplify Volt Pop Culture Disruption ETF (VCAR) and the well-known Ark Innovation ETF (ARKK).

Making waves in Bitcoin has become something of a pattern for China, which sent jitters through the cryptocurrency market for the third time recently with its disavowal of cryptocurrencies.

We will “focus on reducing credit risks, strengthen the supervision of platform enterprises’ financial activities, crackdown on Bitcoin mining and trading behavior, and resolutely prevent the transmission of individual risks to the social field,” he said, according to remarks reviewed by FOX Business.

Many Bitcoin mines in Sichuan were closed on Sunday after authorities in the southwestern Chinese province demanded a pause in crypto mining, according to a report from the Communist Party-backed newspaper Global Times. Over 90% of China’s bitcoin mining capacity is rumored to be shuttered, the paper said. Bloomberg and Reuters also reported on the move from Sichuan authorities.

“When China sneezes, bitcoin catches a cold. But this flexing of regulatory muscle is often just that — in the past eight years, this story has risen its head at least three times.”

China’s crackdown seems to also have led to a significant drop in Bitcoin’s hash rate, or processing power, which has stumbled in the last month, according to data from Blockchain.com. An estimated 65% of global Bitcoin mining is done in China.

Since Bitcoin consumes so much power, there have been growing concerns over its potential environmental damage, with key players such as Elon Musk and U.S. Treasury Secretary Janet Yellen raising alarms. Last month, a coal mine in the Xinjiang region flooded and shut down, taking nearly a quarter of Bitcoin’s hash rate offline.

After recently paying off his house with Bitcoin, CNBC analyst Jim Cramer said he even sold all of his Bitcoin holdings recently because the cryptocurrency is not following what he feels is a logical reaction to regulation concerns.

“Sold almost all of my Bitcoin. Don’t need it,” Cramer said on Squawk on the Street Monday.

While the infamous crypto has has been tumbling lately, Cramer said he would have predicted the opposite, given China’s dramatic efforts to curb mining.

“When you limit mining, [the price]should obviously go up,” he said.

Cramer also seemed worried about Bitcoin’s negative, even criminal perception, citing its role in the Colonial Pipeline ransomware payment and other, unreported ransomware cases, as an issue.

“I think the Justice Department and the FBI and the Federal Reserve and Treasury could coalesce and say, ’OK guys, if you pay ransomware, we’re going to go after you’,” he said.

Ultimately, the analyst just didn’t see the connection between recent events and price action for Bitcoin.

“This is not going up because of structural reasons,” Cramer explained.

Meanwhile, MicroStrategy said Monday it owns over 100,000 Bitcoins after recently completing another purchase round, where it spent almost $489 million on 13,005 tokens.

Given Monday’s action in Bitcoin, shares of MicroStrategy, a Virginia-based enterprise software, lost more than 6% in premarket trading, echoing the losses in Bitcoin.

With praise from Chairman and CEO Michael Saylor, who reports the company’s exploits on social media platforms like Twitter, MicroStrategy has become a well-known Bitcoin supporter.

“We rotated our shareholder base and transformed ourselves into a company that’s able to sell enterprise software and to acquire and hold bitcoin, and we’ve done it successfully with leverage,” Saylor said on an interview with CNBC recently.

“That has increased the power of the brand by a factor of 100. We just had our best software quarter … in the last 10 years last quarter,” he added, noting total revenues were up 10% year over year. “The bitcoin business is driving shareholder returns. I think the employees are happy. The shareholders are happy.”

Despite the news and interest from various investors and speculators, there has yet to be an approved Bitcoin ETF, as the crypto’s rampant volatility and other regulatory concerns have kept regulators on edge.