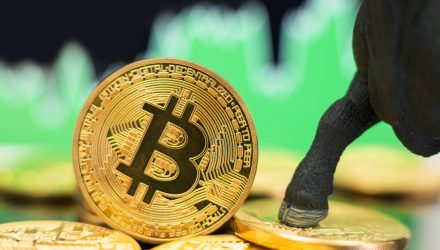 Bitcoin Could Be on Precipice of New Bull Market

Bitcoin retreated on Wednesday, which was a broadly weak day for risk assets, but that one-day retreat doesn’t alter the fact that the largest cryptocurrency by market is hot to start 2023.

In fact, some crypto market observers believe bitcoin’s impressive 2023 start could be the start of a new, potentially lengthy bull market. Should that scenario materialize, it could lift equity-based, crypto-correlated exchange traded funds, including the Invesco Alerian Galaxy Blockchain Users and Decentralized Commerce ETF (BLKC).

BLKC has 57 holdings, and to varying degrees, a significant portion of the ETF’s roster qualifies as crypto-correlated. Translation: A new bitcoin bull market could be a positive catalyst for this ETF.

“According to CryptoHornHair’s analysis, the first 1064 days of each cycle involves a massive rally from the previous bear market trough. Once the market has peaked, it then enters a 364-day bear market. This pattern was followed exactly in the last two cycles. That implies that Bitcoin should rally over the coming years and peak in 994 days (1001 days at the time of CryptoHornHair’s post), before entering a 364-day bear market,” reported Joel Frank for CryptoNews.

Of course, past performance isn’t a promise of future returns, meaning there’s no guarantee that a new bitcoin bull cycle will be identical to prior comparable runs. For many BLKC holdings, it doesn’t need to be. Some BLKC components, including bitcoin miners, are so battered from last year’s weakness that even modest upside for the digital currency could boost the ETF.

“It is worth noting that, even if Bitcoin does end up following its historic four-year market cycle to the letter once again, the gains enjoyed during the coming bull market phase aren’t likely to match those seen in the past. In the 2015 to late 2017 bull market, Bitcoin posted a near 13,000% rally before the bear market began. Meanwhile, during the late 2018 to late 2021 bull market, Bitcoin gained a still impressive but far more moderate 2,000% rally,” according to CryptoNews.

Beyond sheer bitcoin price action, BLKC has other attributes that could support upside this year. Those include a comparatively dense concentration of quality and value stocks relative to other crypto-related ETFs. Roughly 37% of the fund’s holdings are classified as value stocks, and components such as Mastercard (NYSE:MA), Microsoft (NASDAQ:MSFT), Amazon (NASDAQ:AMZN), and Verizon (NYSE:VZ) have clear quality traits. More quality can mean less volatility, which is always a desirable trait when it comes to crypto investing.

vettafi.com is owned by VettaFi, which also owns the index provider for BLKC. VettaFi is not the sponsor of BLKC, but VettaFi’s affiliate receives an index licensing fee from the ETF sponsor.