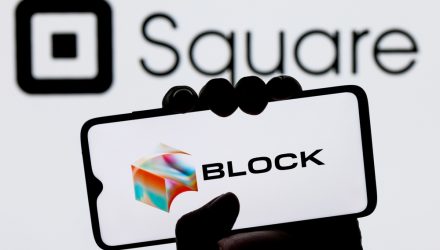 Bet on Block Rebound With This ETF

Jack Dorsey’s Block (NYSE:SQ), the company previously known as Square, is faltering alongside other fintech equities this year. That’s the bad news.

The good news, however, is that while Block is still viewed as richly valued despite a year-to-date decline of almost 46%, the company has the ingredients for a rebound and long-term growth. For investors who don’t want the commitment of dedicated Block exposure, some exchange traded funds are adequate proxies on the stock.

The Fidelity Crytpo Industry and Digital Payments ETF (FDIG) qualifies. FDIG, which debuted in April, allocates 14.59% of its weight to shares of Block as of April 29, according to Fidelity data. That makes the Cash App parent the largest holding in FDIG by almost 530 basis points and makes the Fidelity fund easily one of the largest ETF holders of Block, based on percentage allocated to the shares.

Cash App is an integral part of Block’s long-term growth prospects, and that could ultimately prove positive for investors.

“With Cash App, the average monthly active user brought in just over $1,000 to their accounts in the first quarter of 2022. And Cash App monetized those inflows into gross profit—defined as revenue minus certain transaction processing, bitcoin and hardware costs—at a rate of just under 1.2%. For an active customer in March doing direct deposit with Cash App, that increased their inflows on average by 6½ times compared with someone just using Cash App’s peer-to-peer payments service,” reported Telis Demos for the Wall Street Journal.

There are other reasons for investors to love what Cash App brings to the table. Cash App’s cost of customer acquisition is paltry compared to neo banks and vastly superior to that of brick-and-mortar bank branches.

Additionally, not only do surveys suggest that customers like the Cash App brand over old guard banks, but users who rely on Cash App as a bank are apt to use other services offered by Block.

“When Cash App customers end up shopping at a merchant using Square payment services, that can drive even more-profitable transactions: The structural margin on Square gross profit was nearly 70 cents a dollar in 2021,” according to the Journal.

The recently completed acquisition of buy-now-pay-later firm Afterpay could be another avenue of growth for Block. Currently, a scant percentage of Cash App users are Afterpay customers, indicating that there’s room for growth and that as that percentage increases, more Afterpay merchants could embrace Square payment platforms.