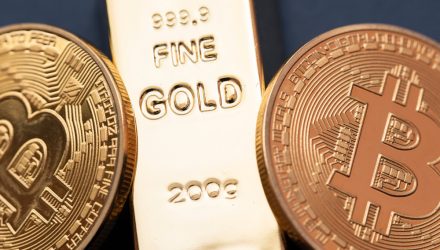 As inflation continues to be a major factor moving forward in the capital markets, hedging with alternative assets like gold or bitcoin can be a prime option. One analyst doesn’t see the former beating the latter this year.

As expected, the U.S. Federal Reserve just upped the federal funds rate by 25 basis points amid rising inflation. Consumers are feeling the pain across the board, especially with energy costs, but as 2022 wears on, which inflation hedge is best at this point?

So far this year, it’s been gold outperforming bitcoin — it’s up 10% while bitcoin is down 11%. Cryptocurrencies this year have been falling in line with equities’ performance, rejecting the notion that bitcoin could serve as an asset uncorrelated to the stock market.

However, there’s a lot of market uncertainty swirling with a confluence of inflation and geopolitical factors entering the market. Mike McGlone, senior commodity strategist at Bloomberg Intelligence, sees this as a perfect storm for bitcoin’s outperformance with respect to gold.

“Facing the Federal Reserve, inflation and war, 2022 may be primed for risk-asset reversion and mark another milestone in Bitcoin’s maturation,” tweeted McGlone. “It’s unlikely for Bitcoin to stop outperforming gold, stock market amid bumps in the road as the Fed attempts another rate-hike cycle.”

Facing the #FederalReserve, inflation and war, 2022 may be primed for risk-asset reversion and mark another milestone in #Bitcoin‘s maturation. It’s unlikely for Bitcoin to stop outperforming #gold, #stockmarket amid bumps in the road as the Fed attempts another rate-hike cycle. pic.twitter.com/4v1kvcq3vd

There are even loftier predictions regarding bitcoin’s outperformance of gold. BitMex co-founder Arthur Hayes wrote a blog post that outlined his theory on bitcoin’s path to potentially $1 million, leaving gold in the dust at $10,000.

Hayes foresees a financial crisis ahead that could upend the traditional monetary system where fiat currency is king. Bitcoin and gold could both benefit exponentially as stores of value should such a collapse come to fruition.

What happens when you “cancel” the world’s largest energy producer … ? “Energy Cancelled” is an essay on why the post-1971 Petro / Eurodollar regime died on 26 February 2022. Are you ready for $1 million #Bitcoin and $10,000 #Gold?https://t.co/EttRAmPPS9 pic.twitter.com/LOSqaseq3N