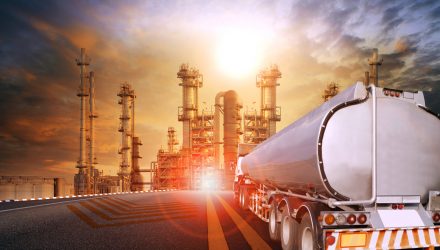 USO fell slightly–0.39%, while DBO and BNO both dropped by about 0.53%. The losses were part of a much bigger drop as the bear market in oil has resulted in its longest losing streak since the middle of 1984, based on Refinitiv data.

Oil analysts point to a combination of higher-than-expected output from key producers and a gloomy outlook for oil demand. The decline in prices is an about-face from last month’s rally that saw oil hit four-year highs based on the assumption that supply would be crimped due to reduced output from Iran as a result of the U.S. leveling sanctions.

“The market’s not tight. I think there are windows where you could perceive it to be tight, and I think the markets got caught into that,” said Christian Malek, head of EMEA oil and gas research at J.P. Morgan. “The reality is that we’re still in a world where we’re overproducing and we’ve got surplus.”

Oil prices sank to correction territory on Thursday while the major stock indexes have been rallying, and are poised for a gain to end a midterm election week after a healthy dose of volatility in October. The Dow Jones Industrial Average fell over 150 points as of 11:40 a.m. ET, but is up 3.1% through Thursday’s close.

The stock markets were spurred on via a midterm election rally, which resulted in the Democrats regaining majority in the House of Representatives, while the Republicans maintained control of the Senate. The general consensus among analysts is that a divided Congress will create political gridlock, which typically benefits the capital markets.