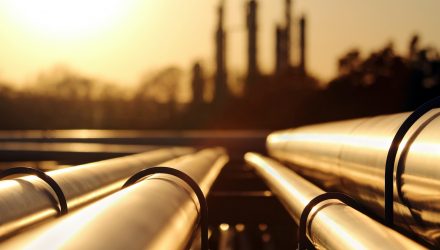 As stocks and bonds continue their recent steep fall from last month, crude ETFs rocketed as crude oil surged to a three-year high on Monday after OPEC+ confirmed it would maintain its current output policy, amid increasing demand for petroleum products.

OPEC+ decided in July to boost output by 400,000 barrels per day (bpd) each month until at least next spring to phase out 5.8 million bpd of existing production cuts.

Meanwhile, U.S. benchmark West Texas Intermediate crude oil added 2.4% to its gains from last week, and is now targeting $80 per barrel as well, trading above $78 on Monday.

The cartel has faced mounting pressure from some countries to loosen supply, as demand has recovered at a swifter pace than expected in some parts of the world. This tight supply is generating concern from analysts that prices will continue to surge.

Sriram Iyer, senior research analyst at Reliance Securities noted, “International oil prices have turned positive this afternoon in Asian trade ahead of OPEC meeting. We believe that If OPEC+ sticks to its planned 400,000 bpd increase in November, oil could test $90 very soon.”

The oil price rally has also been driven by an even larger increase in gas prices, which have exploded by 300%, causing many to switch to fuel oil and other crude products to generate electricity and for other industrial needs.

U.S. oil producers are hampered from boosting supply to tamp down spiking crude prices that remain “under Opec control,” according to the shale patch’s biggest operator.

“Everybody’s going to be disciplined, regardless whether it’s $75 Brent, $80 Brent, or $100 Brent,” Sheffield said. “All the shareholders that I’ve talked to said that if anybody goes back to growth, they will punish those companies.”

“I don’t think the world can rely much on US shale,” he said. “It’s really under Opec control.”

Pioneer purchased two rival Texas producers this year, allowing it to become the Permian Basin’s largest single oil producer with output of nearly 360,000 barrels a day, which is larger than some OPEC nations’ outputs.

The expanded OPEC+ alliance, which also includes allies such as Russia, met Monday to determine whether to maintain output targets.

The cartel opted for deep production cuts last year to shore up crude prices that had plummeted to negative levels as pandemic lockdowns damaged energy consumption.

But the situation has now reversed, and supplies are now lagging behind demand amid the pandemic recovery, with global crude stockpiles getting depleted at a breakneck pace, according to Goldman Sachs. Last week, the bank raised its end-of-year Brent forecast from $80 to $90 a barrel. On Friday, Brent settled at $79.28.

Some analysts also believe that the gas shortage affecting Europe and Asia could affect markets for liquid fuels, catalyzing demand for crude this winter as industries burn more oil to generate electricity.

In July, OPEC+ decided to release 400,000 bpd each month until the end of 2022, but some analysts say that supplies need to be released more quickly to prevent additional price inflation. The Federal Reserve has already adjusted its inflationary target to 4.2%, noting that its earlier target has been eclipsed.

Sheffield said that while the Biden administration was asking OPEC to increase supplies, it was trying “to slow down US drilling in any way they can” through moves such as a moratorium on leasing federal lands for drilling.

“They’d rather import crude oil from Opec,” he said.

Rocketing shale production over the past 10 years has made the U.S. the world’s biggest crude producer, pumping almost 13 million barrels of crude a day in late 2019.

But years of costly drilling depleted some fields, say operators, and created disgruntled investors, leaving the sector vulnerable when the pandemic struck in 2020. The price collapse meant that producers were forced to cut capital spending and idle rigs.

While drilling activity has increased, production remains almost 15% below the pre-pandemic peak.

“There’s only four or five companies that have core (acreage),” and shale would never again hit the annual growth of around 1.5m bpd seen in previous years, Sheffield said.

“Maybe a million, at top, for a couple of years,” he added.

This has all been good news for crude ETF investors, who have seen significant gains as oil prices have surged. Crude funds like United States Oil Fund (USO) and the ProShares Ultra Bloomberg Crude Oil (UCO) are both making sizable gains on Monday, while long stock investors nurse their losses.