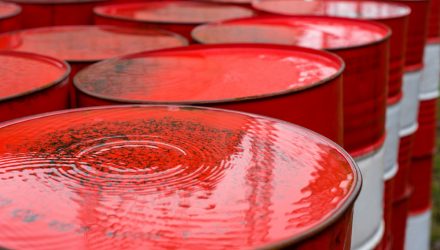 After several days of consolidation, crude oil and crude ETFs rallied for their third consecutive day of gains on Wednesday. But things are still tenuous as producers navigate the fallout from crude recording one of its most damaging years in 2020.

WTI crude oil continues to surge higher for the third consecutive day, with the benchmark hitting $56.33, for a gain of more than 2%, before falling back into the $55 territory. At this point crude oil is challenging price levels from last March, and eyeing the $60-65 range after that.

The moves are helping to drive crude ETFs like the United States Oil Fund (USO), which climbed 1.77%, and the ProShares Ultra Bloomberg Crude Oil (UCO), which gained more than 3.45%.

But while crude has been climbing steadily since last November, oil companies had one of their worst years in history in 2020, as the coronavirus pandemic drove their financial results well into unprecedented negative territory.

Earlier this week, BP reported a net loss of $5.7 billion for 2020, blaming oil and gas price weaknesses and demand destruction.

Exxon also suffered last year, recording the most significant loss in its modern history, at $20 billion, which included an impairment charge of $19.3 billion.

“The past year presented the most challenging market conditions Exxon Mobil has ever experienced,” Exxon’s chief executive Darren Woods said, as quoted by the Wall Street Journal.

The situation has become so dire for Big Oil that reports surfaced earlier this week that Exxon had actually considered a merger with rival Chevron. Meanwhile, big players were slashing costs by ridding themselves of non-core assets and curbing capital spending schedules.

The oil and gas sectors also face mounting pressure from regulators and shareholders to make firmer commitments to a lower-carbon future.

BP, for instance, has agreed to slash its oil and gas production by 40 percent by 2030, while Exxon just said it would create a Low Carbon Solutions unit to generate over 20 new carbon capture and sequestration (CCS) opportunities around the world.

“An unprecedented demand collapse has forced the hand of Big Oil to right-size their dividends and capital frames; meanwhile plans for energy transition have been accelerated,” said JP Morgan analyst Christyan Malek.

Despite the tough times for Big Oil last year, demand for crude is continuing to pick up, and some project it to rebound to pre-pandemic levels before 2021 is over.

Meanwhile,  ESG ETFs are in position to capture the transition to more renewable energy sources, as the screens often maintain some level of exposure to oil and gas companies. The SPDR’s ESG S&P 500 ETF (EFIV) is a prominent example.