You are at:Home»Featured»Crude Oil ETFs Crater for the Sixth Day in a Row 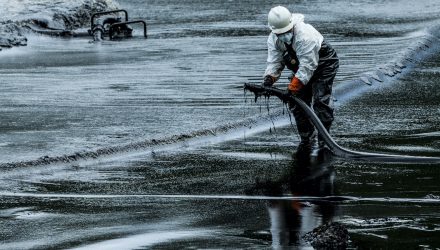 Crude Oil ETFs Crater for the Sixth Day in a Row

Crude oil and crude ETFs are under pressure once again, falling for a sixth consecutive session on Thursday, as demand worries and a late reaction from the Federal Reserve that it will suspend its bond-buying program sent prices plummeting.

Falling to its lowest level since May, crude oil caved along with the broader commodities market.

The U.S. oil benchmark, West Texas Intermediate crude futures, tumbled as much as $2.74, or 4.2%, to trade at $62.69, before paring the worst losses on the day. The contract is on its longest daily losing streak since February 2020, and has now relinquished over 8% this week, falling from last months highs of over $76 per barrel. International benchmark Brent crude also was under pressure on Thursday, dropping 3.8% to $65.67 per barrel.

While a number of factors like weakened demand have been weighing on crude oil lately, the dollar climbed on Thursday following the minutes from the Federal Reserve’s July meeting Wednesday, where the central bank hinted at plans to restrict the rate of its monthly bond purchases, sending equity markets lower overnight as well. A healthy dollar can pressure oil since it makes the commodity more costly for foreign buyers.

Poor data out of China has also hurt crude prices recently, after new numbers released Monday revealed that the economy was more stagnant than expected in July. Additionally, the country’s refinery output tumbled to the lowest level in 14 months.

“Concerns about demand due to the global spread of the Delta variant are continuing to preclude any higher prices,” analysts at Commerzbank wrote in a recent note to clients.

Data from the U.S. Energy Information Administration released Wednesday also revealed an unexpected supply in gasoline stocks, which created concerns that there might be a weaker-than-expected end to the summer driving season, as the coronavirus continues to spread throughout the United States and globe.

“Though the summer driving season still has three weeks to go, it is already clear that it will not meet the high expectations,” Commerzbank added.

Crude ETFs have been the recipients of losses in the oil futures, with funds like the United States Oil Fund (USO) and the ProShares Ultra Bloomberg Crude Oil (UCO) declining.

Building on last year’s gains, oil continued to climb rapidly during the first half of the year as demand returned and producers restrained supply. But the momentum began to wane in July as the more transmissible delta variant of the coronavirus started to spread. WTI alone is now down 18% from its recent high of $76.98 from July 6.

“There are still too many question marks over the crude demand outlook over the next few months and that will weigh on crude prices,” said Ed Moya, senior market analyst at Oanda. “After the release of the Fed’s Minutes, risk aversion prevailed and oil prices returned back to session lows,” he added.

The International Energy Agency (IEA) last week also noted that increasing demand for crude oil changed direction in July and was predicted to gain at a slower rate over the remainder of 2021 because of fresh and expanding coronavirus infections from the delta variant.

“After the EIA data came out, the market initially reacted positively, but as traders assessed the fundamentals with respect to demand risk, they changed their tune,” said Bart Melek, head of global commodity strategy at TD Securities. “The stronger dollar had an additional impact, but what it comes down to is that the market is reeling from delta’s continued threat to consumption.”

The fall in crude oil may have also affected money managers, who curbed their net-long U.S. crude futures and options holdings in the week to Aug. 10, according to the U.S. Commodity Futures Trading Commission (CFTC) report on Friday.

For many traders, who have been betting that the run-up in oil will continue, the sharp decline over the last month has been a wake-up call.

“There seems to be a lot of people getting squeezed out of long positions,” said Phil Flynn, analyst at Price Futures Group.

Weakening demand from China has also been a key factor in the decline in oil prices.

“The $100-a-barrel predictions we saw earlier in the summer were rendered completely inaccurate as Asian demand continues to be muted,” said Jay Hatfield, chief executive officer of Infrastructure Capital Management. “Delta notwithstanding, an overall stockpile decline indicates some positive long-term fundamentals for oil.”

While there are relatively few options aside from the ProShares UltraShort Bloomberg Crude Oil (SCO), which has been highly profitable for savvy contrarian traders from the drop in oil prices, investors looking to an oil rebound can look to the United States 12 Month Oil Fund (USL) and the iPath Pure Beta Crude Oil ETN (OIL).