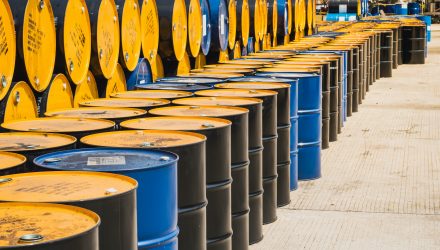 Crude oil is climbing higher on Wednesday amid optimism that a coronavirus drug could lead to an earlier economic recovery while U.S. crude output continued to drop.

The Energy Information Administration (EIA) reported U.S. crude output slipped to 12.1 million bpd last week from 12.2 million in the prior week and has fallen from the crest of 13.1 million bpd that occurred in early March.

The storage of inventories, something that has continued to be an issue due to limited capacity was less than expected as well, climbing by 9 million last week, which was a sizable decline from the gain of 15 million in the prior week. Analysts predicted a 9.8 million-barrel increase in U.S. crude supplies, according to analysts polled by S&P Global Platts. Late Tuesday, that American Petroleum Institute, an industry group, stated that U.S. stockpiles increased by 9.98 million barrels.

Despite the rally, oil is still hanging near its all-time lows, as oil storage still remains a concern, and facilities could hit maximum capacity in a less than a month according to experts.

“The front-month WTI crude oil future is becoming a very lonely place,”  Phil Flynn, senior market analyst for the Price Group, wrote in his daily energy report Tuesday. “Fears that storage will top out and predictions of another assault on negative oil prices are making firms and exchanges force the hand of participants and pressure them to exit the market.”

Crude oil ETFs are also moving amid the news, with the United States Oil Fund, LP (USO), which has been in the news a considerable amount recently, climbing 5.11%.

S&P Global told clients Tuesday to dump their June WTI futures, according to Bloomberg, after USO announced Monday that it would cut its holdings in the most forward futures contract.

The fund’s entire goal, according to its prospectus, is “to reflect the daily changes in percentage terms of the spot price of light, sweet crude oil delivered to Cushing, Oklahoma, [aka WTI Crude]as measured by the daily changes in the price of a specified short-term futures contract on light, sweet crude oil called the ‘Benchmark Oil Futures Contract.'”.

USO slashed its front month holdings from 80% to 20% in just a matter of days, seeming to belie the intentions of the fund according to the prospectus.