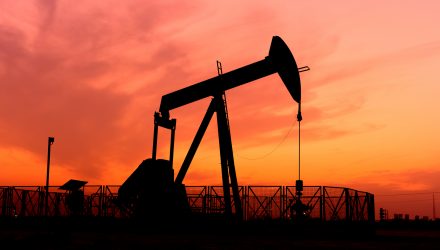 With stocks and index ETFs tumbling on Monday amid exploding volatility, crude oil futures and ETFs are also under pressure.

U.S. Benchmark West Texas Intermediate crude futures sank below $70 per barrel on Monday for the first time in over a month as OPEC and its allies agreed to raise output.

WTI futures fell over 8% to hit a session low of $65.72 for its biggest one-day decline since September 2020. The contract is now 13% below its recent high of $76.98 from July 6, which was the highest level in more than six years, and has broken a number of technical levels. International benchmark Brent crude also lost over 7% on Monday.

OPEC+ agreed Sunday to boost production by 400,000 barrels each month beginning in August. The output increase will continue through September of next year, at which point all of the almost 6 million barrels per day the group is still withholding will be available to the market.

The announcement arrived after the group’s initial meeting on July 1 hit a snag, amid a disagreement between Saudi Arabia and the United Arab Emirates over the latter’s baseline production requirements.

The deal “ended a fortnight of uncertainty and the tail risk of an implosion in the producers’ alliance,” Vanda Insights said in a Monday note.

The energy ministers of Saudi Arabia and the UAE spoke at a press conference on Sunday reclaiming their commitment to communicating.

“We appreciate the constructive dialogue we had with his highness and OPEC,” UAE’s Energy Minister Suhail Al Mazroui said, referring to the Saudi Energy Minister, Prince Abdulaziz bin Salman.

“I confirm that the UAE is committed to this group and will always work with it and within this group to do our best to achieve the market balance and help everyone. The UAE will remain a committed member in the OPEC alliance,” Al Mazroui said at the OPEC presser after the meeting.

“Consensus building is an art,” Abdulaziz bin Salman said, declining to say how the consensus was built.

“We view [Sunday’s] deal as supportive to our constructive oil price view with supply increasingly becoming the source of the bullish impulse and evidence of non-OPEC supply shortfalls likely in the coming months,” Goldman Sachs said in a note to clients. The firm pointed to discipline among U.S. producers as providing a floor for oil prices, although it noted that the delta variant could lead to price gyrations in the coming weeks.

Energy stocks also saw a decline. Energy fell over 4.5%, making it the worst-performing S&P 500 sector, as key energy players like Occidental, Diamondback Energy, Schlumberger, and Marathon Oil tumbled more than 6%. The United States 12 Month Oil Fund LP (USL) and iPath Series B Bloomberg Energy Subindex Total Return ETN(JJE) suffered losses as well.
Despite Monday’s steep slide, many analysts are still supportive of higher crude price. Credit Suisse raised its projections Sunday night, now envisioning Brent averaging $70 per barrel in 2021, up from a previous estimate of $66.50. The firm also increased its WTI forecast to $67 for the year, up from $62.

Citi, meanwhile, sees an even bigger run-up in black gold, with Brent and WTI climbing to $85 or more this year.

“The summer season for petroleum markets should be stronger than usual this year on pent-up leisure demand,” Citi said in a note to clients.

“With oil demand growth outpacing supply growth in the near term, we still expect a tight summer, which should boost oil prices,” added UBS. The firm envisions Brent climbing to $80 before retreating to $75 by the end of the year.

Despite the steep selloff, WTI still shows 38% in gains for the year amid a recovery in demand.

“The crude oil price sell-off is now eyeing major confluent uptrend support at 65.92-66.57– we’re on the lookout for possible inflection down here. From at trading standpoint, look to reduce short-exposure / lower protective stops on a stretch into this key zone – recoveries should be capped by the median-line IF price is heading lower with a weekly close below needed to keep the bears in control. I’ll publish an updated Crude Oil Price Outlook once we get further clarity on the near-term WTI technical trade levels,” wrote Michael Boutros, Strategist for dailyfx.com

The national average for a gallon of regular gas stood at $3.17 on Monday according to AAA, up 97 cents over the last year.

″[Sunday’s] deal will likely please the White House, which has worried not only about the impact of higher gasoline prices on US consumers but also about a major rift between its key regional allies as it seeks to build a grand producer coalition to tackle climate change,” RBC’s Croft said Sunday in a note to clients.