You are at:Home»Featured»Crude ETFs Encounter Volatility in Wake of Tropical Storm Ida 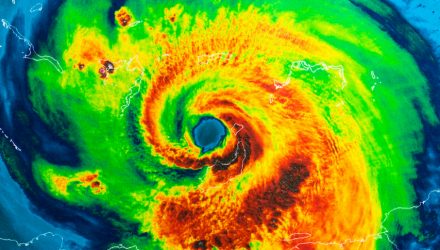 Crude oil futures and crude ETFs have been volatile following the fallout from Hurricane Ida and investor concerns about an OPEC+ meeting that could potentially result in additional output once again.

Oil futures dropped by as much as 1.6% Monday, as analysts and workers assessed damage from Ida. Gasoline futures rocketed over 4% earlier in the session before retracing some of those gains. While Gulf of Mexico producers had closed out about 1.7 million barrels a day of crude output ahead of the storm, refineries in Louisiana may be more sluggish to return to full production.

Analysts seem to believe that the impact from the hurricane could be smaller than originally predicted.

“The market is regarding the impact on crude production as minimal at this point from Ida unlike refining,” said Bart Melek, head of global commodity strategy at TD Securities. “This means less demand for feed as refiners have a reduced capacity, which could see crude scarcity worries go away.”

Platts Analytics had said that approximately 4.4 million b/d of refinery capacity were in Ida’s path, which correlated with the hurricane making landfall in Louisiana. These facilities accounted for roughly 1.4–1.6 million b/d of gasoline output, 1.1–1.3 million b/d of distillate production, and 300,000–400,000 b/d of kerojet supply, which means there will likely be another spike at the pump soon.

“Hurricane Ida is expected to come ashore along the same path as other storms, which did extensive damage to USGC refining and petrochemical facilities. Many plants have been hardened against hurricanes, but disruptions in operations are still very likely due to flooding, power outages and personnel dislocations,” Platts Analytics said.

Ida was expected to “rapidly intensify as it moves over the Southeastern and Central Gulf of Mexico tonight” on Aug. 28, the National Hurricane Center had stated.

Roughly 2.11 million barrels a day of refining capacity, representing approximately 12% of the U.S. total production, was shuttered or limited at plants along the Mississippi River on Sunday.

Ida is not the first upset to the oil and gasoline markets, as crude oil and gasoline prices have witnessed significant volatility this month, trading from near $73 per barrel in WTI crude oil, down to the $61 level, before pressing higher once again due to concerns over the pandemic.

Investors pondered oil consumption needs given the continued pandemic resurgence in parts of Asia, the U.S., and Europe. Meanwhile, the Organization of Petroleum Exporting Countries and its partners are projected to continue with their plans to boost output this week.

Energy traders will be monitoring the OPEC and non-OPEC Ministerial Meeting, where experts predict the group will forward with plans to revive production, with some anxiety over demand from China eased. Last month, oil prices fell hard after OPEC+ decided to gradually terminate the remainder of production limits that commenced last year.

Overnight, Hurricane Ida smashed New Orleans and the Louisiana coast, slamming the area with torrential rain and vicious gusts of wind, leaving much of the region bereft of electricity and preparing for floods. The storm forced a wall of water inland when it burst ashore Sunday as a Category 4 hurricane and reversed the course of part of the Mississippi River.

During a flyover by the U.S. Coast Guard on Sunday afternoon, however, the Shell-operated Mars revealed that Olympus and Ursa crude and natural gas platforms remained on location.

“We expect a more rapid return of oil production than refining production in the region,” Goldman Sachs Group Inc. analysts wrote in a note Monday. It’s too early to determine how long refineries in the region will remain shut, they said.

With the panic that accompanies such a massive tropical storm, gasoline prices in the southeast U.S. could surge in the coming weeks if refineries suffer extensive damage or remain shuttered for a prolonged period, adding to the existing price inflation hitting Americans.

“For a Category 4, you could be looking at four to six weeks or more of downtime for the refineries,” said Andy Lipow, president of Lipow Oil Associates LLC in Houston.

Ida, which came ashore about 60 miles (97 kilometers) south of New Orleans, drove up ocean levels as much as 16 feet (4.9 meters). The hurricane’s 150-mile-per-hour winds tie records previously set in Louisiana by Laura in 2020 and a 19th century storm.

Richard Joswick, head of global oil analytics at S&P Global Platts, explained on CNBC that, “A lot of facilities are out of power and roughly 2 million barrels a day of capacity are offline right now. But luckily the storm missed many of the more vulnerable areas. It could have been worse. It could have been up to 4 million barrels a day that are out.”

Joswick added, however that, “Its a big number. That volume is supplied typically not just to the gulf coast area, but also goes up a pipeline, the Colonial Pipeline system, up to the U.S. East Coast, and also Mexico really relies on the U.S. gas and exports. So really all three regions are a little bit vulnerable to this loss of capacity.”

Fortunately, Joswick believes that at the refinery level there is probably sufficient coverage for the next couple of weeks. The issue that could arise, however, is if there is panic at the pumps, which could result in chaos and gasoline shortages, driving gas prices even higher.

For energy investors, this could mean a continued move higher in the energy complexes, including crude futures and ETFs.