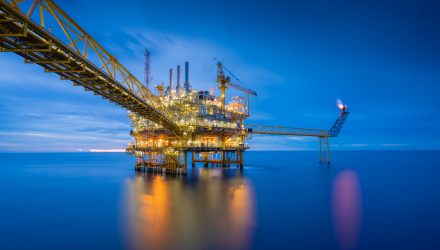 With crude oil reaching levels not seen since October of 2014, sending crude ETFs surging, some experts are now suggesting that Russia’s invasion of Ukraine may have generated an energy market disturbance that could rival what happened in the 1970s.

Since handily breaching $100 per barrel last month, West Texas Intermediate crude oil has continued to run higher, approaching $120 on Thursday before pulling back into the prior day’s range.

The move has largely been a result of concerns over Russia’s invasion of Ukraine, as Moscow is one of the world’s largest oil exporters. Sanctions established by the U.S. and allies on Russia’s financial system, an attempt to stem the invasion and war, have already caused banks, buyers, and shippers to recoil from Russian crude.

“This is going to be a really big disruption in terms of logistics, and people are going to be scrambling for barrels,” claimed Daniel Yergin, vice chairman of IHS Markit. “This is a supply crisis. It’s a logistics crisis. It’s a payment crisis, and this could well be on the scale of the 1970s.”

Yergin, also an author and energy market expert, said that although Russian energy was not sanctioned by the U.S. and other countries, there could still be a major loss of Russian crude. Since Russia exports about 7.5 million barrels a day of oil and refined products, this could cause major problems.

In order to control the damage and avoid such a catastrophe, Yergin said that good communication between nations is critical, and that governments “need to provide clarity.”

Yergin explained that members of NATO get roughly 50% of their imports from Russia. “Some share of that is going to be disrupted,” Yergin said.

While I wrote about the possibility of $100 per barrel oil as early as last summer, JPMorgan now also predicts that crude prices could reach $185 by the end of the year if Russian oil remains disrupted.

“This could be the worst crisis since the Arab oil embargo and the Iranian revolution in the 1970s,” Yergin said. Both events were significant jolts to oil, resulting in Americans lining up at gas stations in that decade to pay exorbitant prices.

Of course, all this is good news for ETF traders who favor crude oil. With a steady run-up since last April, crude ETFs like the United States Oil Fund (USO) and the ProShares Ultra Bloomberg Crude Oil (UCO) could see potentially massive gains, while short ETFs like the ProShares UltraShort Bloomberg Crude Oil (SCO) could suffer with rising prices.