You are at:Home»Featured»Crude ETFs Climb Despite News That SPR Reserves Could Be Released 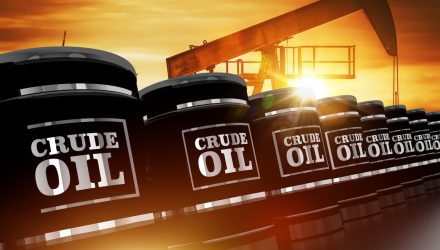 Crude ETFs Climb Despite News That SPR Reserves Could Be Released

Crude oil ETFs are gaining ground on Tuesday despite comments from President Biden that the administration will open the Strategic Petroleum Reserve as part of a worldwide effort by energy-consuming nations to temper this year’s surge in gas prices.

While U.S. crude oil dipped 1.9% to a session low of $75.30 per barrel following the announcement, the commodity quickly recovered to trade into the green. West Texas Intermediate crude oil, or WTI, traded up about 2.4% higher at $78.55 per barrel, as of just after 2:00 PM EST. Meanwhile, International benchmark Brent crude traded at $82.31 per barrel, climbing 3.2%.

Rebecca Babin, a managing director at CIBC Private Wealth US, described the coordinated release as “well telegraphed” and therefore noted that it was likely already priced into the market.

“Positioning across the crude complex has been drastically reduced over the past couple of weeks as traders lock in profits ahead of year end reducing the initial reaction,” Babin added. Crude prices have pulled back after U.S. oil and Brent rose to their highest levels in seven and three years, respectively, in October.

Gas prices have been plaguing Americans this year as inflation continues to surge. Tuesday’s announcement goes along with the Biden administration’s comments for months that it was examining the options available to tamp down the price of oil, as West Texas Intermediate crude futures rocketed out of consolidation to a seven-year high, above $85.

“The President stands ready to take additional action, if needed, and is prepared to use his full authorities working in coordination with the rest of the world to maintain adequate supply as we exit the pandemic,” the White House said in a statement.

At the highest price in seven years, the national average for a gallon of gas was $3.409 on Monday, according to AAA, a gain from $2.11 one year ago, with prices in California well above $5 a gallon. Crude prices constitute between 50% and 60% of what consumers pay to fill their tanks, AAA said.

As of November 19, the SPR held 604.5 million barrels extended across four sites, according to the Department of Energy. Altogether, the SPR, which was founded in 1975 after the oil embargo, can hold 727 million barrels. It takes roughly two weeks after a presidential announcement for the oil to be released onto the market, the department said.

The SPR can be accessed in three ways: a full drawdown to counter a “severe energy interruption,” a limited drawdown of up to 30 million barrels, or a drawdown for an exchange or test sale, according to the DOE.

“This is a well-timed move to try and lower oil prices,” John Kilduff, partner at Again Capital, said after the announcement. “This added supply should help to bridge the production shortfall ahead of winter, especially if we get confirmation of meaningful supply, as well, from several of the major Asian consuming nations.”

The Biden administration has decided to take action after numerous failed attempts to persuade OPEC and its allies to boost output amid climbing fuel prices.

In April 2020, OPEC made the unprecedented decision to clip nearly 10 million barrels per day from the market as the pandemic sapped demand for petroleum products. Other producers, including the U.S., also curbed production as oil prices plunged to never-before-seen lows.

However, demand has rebounded strongly since that historic low, while producers have been hesitant to return oil to the market, which has pushed crude to multi-year highs.

“Today marks an official emergence of an ‘anti-OPEC+’, a group of top oil-consuming countries that are taking the supply-side dynamics into their own hands in the unconventional and unprecedented release of strategic petroleum reserves to create artificial looseness in the oil market and deliver a negative blow to oil prices,” said Louise Dickson, senior oil markets analyst at Rystad Energy.

“The supply side support is intended to quell oil prices and keep pandemic GDP recovery on track, especially amid the backdrop of an increasingly inflationary macro environment,” Dickson added.

If crude continues to climb, ETFs like the United States Oil Fund (USO) and the ProShares Ultra Bloomberg Crude Oil (UCO) could see potentially massive gains. However, if the Biden administration and its allies are able to successfully release crude into the markets, short ETFs like the ProShares UltraShort Bloomberg Crude Oil (SCO) could see considerable gains, even if short-lived.

For bullish investors looking for crude ETFs to play the run-up in oil, which has been fairly steady since November, the United States 12 Month Oil Fund (USL) and the iPath Pure Beta Crude Oil ETN (OIL) are two other funds to consider.