You are at:Home»Featured»Crude ETFs Climb Back Amid Colonial Pipeline Resumption 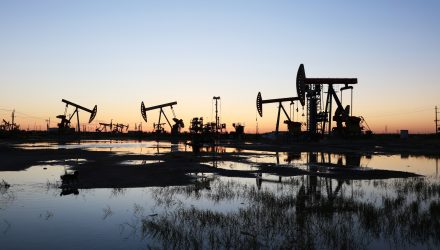 After a sharp decline on Thursday, crude oil and crude ETFs are scrambling back toward recent highs, amid news concerning the resumption of the Colonial Pipeline, and news that the federal government has allowed Valero Energy a waiver from the Jones Act—legislation limiting the quantity of vessels that can transport oil and fuels along the U.S. coastline.

Reuters reported the headlines, citing anonymous sources familiar with the matter, who mentioned that Marathon Petroleum and Citgo had also requested waivers from the legislation in order to commence shipments to restless East Coast regions that have been battling over fuel recently.

Despite the resumption of operations, supply is likely to remain constrained until the normal flow of fuels is restored, which could continue to drive crude prices higher. The Jones Act states that only U.S.-flagged tankers with U.S. crews have the right to move goods between U.S. ports.

The shortage of fuel was spurred in part by panic buying along the East Coast after the shutdown of the Colonial Pipeline network, an event that was caused by a cyberattack carried out by a ransomware group. The FBI claims that DarkSide, a group relatively new to the ransomware scene, is responsible for the attack.

The federal government released an emergency declaration for 17 states and the District of Columbia after the country’s most substantial fuel pipeline was shutdown, spurring a surge in gas prices. Colonial paid nearly $5 million as a ransom to unlock its systems, according to anonymous sources available to CNBC and Bloomberg.

While the attack was shocking and induced a gas-buying frenzy, such events are not unprecedented.

“Everyone is reporting on this ransomware attack because it affects the networks involving an oil pipeline,” said Katie Nickels, director of intelligence at the cybersecurity firm Red Canary.

“The thing that is interesting for myself and a lot of other cybersecurity professionals is that these ransomware attacks have been going on for years. And it seems like this one, just because it involved critical infrastructure in the U.S., has struck a particular nerve.”

“Colonial Pipeline reports this morning that the restart of the pipeline went well overnight. This should mean things will return to normal by the end of the weekend,” U.S. Secretary of Energy Jennifer Granholm tweeted early on Thursday.