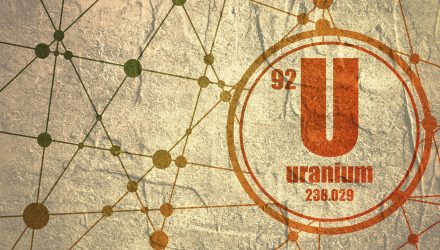 “Production cuts, halted projects and operations, as well as renewed interest from investors has helped drive uranium prices up by 30% in the past four months, but experts remain cautious about the long-term outlook for the commodity,” reports Mining.com. “Decade-low prices have had a negative effect on the profitability of existing mines and a devastating effect on the capacity of early-stage projects to raise the necessary funding to be mine-ready when demand picks up.”

URA, which is nearly eight years old, targets the Solactive Global Uranium & Nuclear Components Total Return Index. The ETF’s components include companies engaged “in extraction, refining, exploration, or manufacturing of equipment for the uranium and nuclear industries,” according to Global X.

In Need Of Help

“Cameco, the world’s largest publicly traded uranium producer, has indefinitely suspended key operations and reduced its workforce across all sites, including its head office,” according to Mining.com. “Kazatomprom, in turn, not only lowered output, but also recently bypassed the spot market by selling a big portion of its annual output production to Yellow Cake, a London-listed investment vehicle planning to buy and store large amounts of the metal in anticipation of higher prices.”